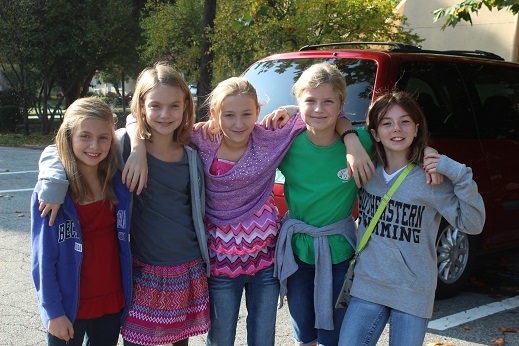 The girls arrived to our house at 9AM on a Sunday morning back in October.  I had a plan.  Cat Café, lunch, a little shopping, doctor fish and then back home for a little birthday cake!  Sounds like a good plan - right?  Well it is good until you arrive at the Cat Café & realize they are CLOSED on Sundays!!  (Yes, I checked before we went, I knew they opened at 10AM, but I guess my Konglish isn't as good as I thought because I didn't get the "we are closed on Sunday" memo.) 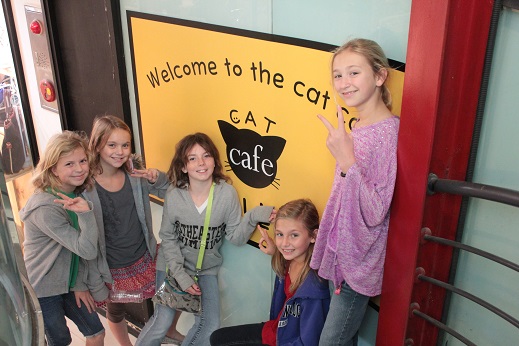 So THIS is as close as my girl got to playing with the sweet little kitties.
But don't worry, this EPIC FAIL is going to be restored....we still have doctor fish, lunch and maybe one of the other 5 Cat Cafés in Myeongdong will be open.  Failure is NOT an option.
Plus, the stop at Dunkin' Donuts helped ease the pain a *tiny* bit. 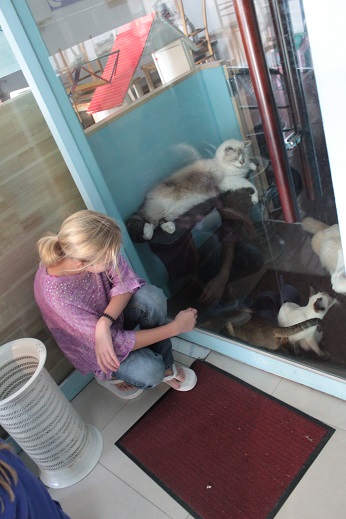 On our quest to find another Doctor Fish these sweet young Korean college students wanted us to take a survey for their English class. 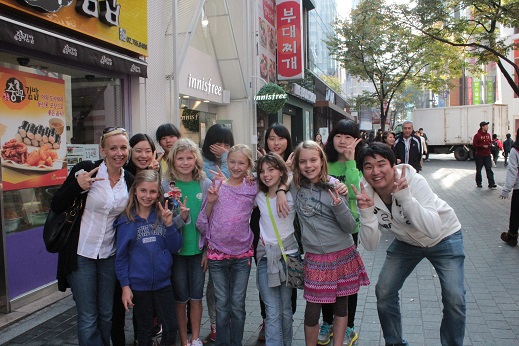 Now, I had read in multiple blogs about the Dr. Fish in Myeongdong - the only problem I ran into was that NOT ONE single person could give the location of this mysterious Dr. Fish.  Many places said to look up and you will find it...it is on the 2nd or 3rd floor of a building.  I was confidant in my ability to find it - maybe a little too confident.  Finally we stopped at the Global Center to ask for directions.  This is where we were informed that the Doctor Fish I was looking for closed a few months ago, (EPIC FAIL #2 of the day) but not to worry there were a couple of other locations in Myeongdong for Dr. Fish.  At that point I ask if any of the Cat Cafés were open on Sunday - the answer was shocking - out of the 5 Cat Cafés in Myeongdong NONE of them open on Sunday.  I guess cat's need their rest.   I was informed that the Dog Café opens at noon. You should have heard the squeals that came from the 5 girls in my group. (Epic fail restored!)

Since we had a little time to kill and the girls were hungry they decided they wanted to eat street food instead of going to a sit down restaurant.  French fry corn dogs on a stick it is! 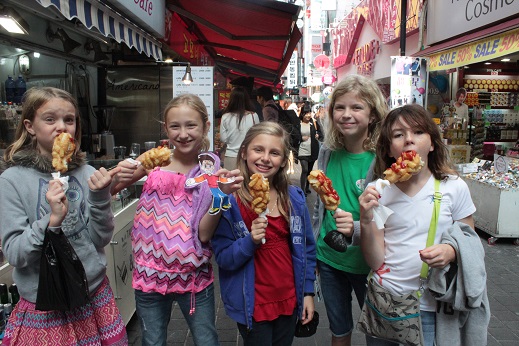 As we were walking and eating we stumbled upon The Foot Shop and there was a sign that said "Dr. Fish" - we went in.  The girls were SO EXCITED until the guy told me it was going to be 20,000 won PER PERSON!!    WHAT?!?!  It is typically 2 or 3,000 won per person.  That is when I realized he was going to give them all foot massages & Dr. Fish.  This is a POSH place, not a place to bring five 11 year old squealing girls. This could have been Epic fail #3, but  I pleaded and bargained with him and finally got them all in for 20,000 won but he said they need to be 'quiet' - BAHAHAHAHA!! Did he not see that there are 5 young girls chomping at the bit to stick their feet in a tub of little fishies nibbling at their feet?!?!  I mean this tickles like you cannot believe - So like any good mom would do, I agreed anyway knowing I could not hold up to my end of the bargain.  I mean come on this was for the greater good of birthday girls everywhere! 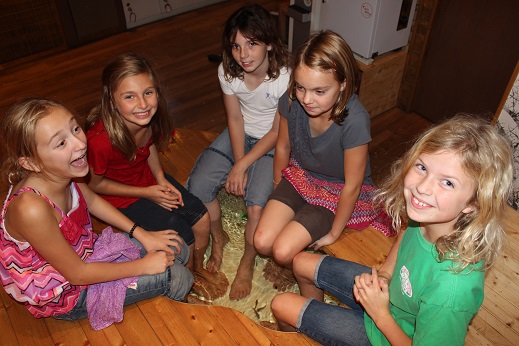 And as you can see - the 'quiet' part really worked:
Next up, Dog Café! 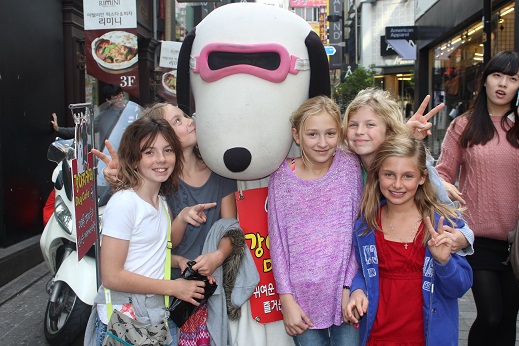 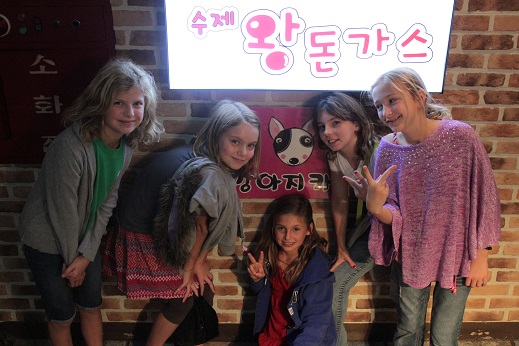 So the dog café is pretty similar to the Cat Café except MUCH louder and much more stinky.
The entry fee is an 8,000 won drink.
The girls had hot chocolate and I had a latte.
The girls had a ball playing with the dogs.
I personally didn't even want to sit down because I saw a dog pee on the leg of a table, another one pee on the leg of a chair, I saw a dog poop on the floor.  I was gagging!  Now the staff was amazing and had very sharp eyes because each time a dog went potty there was a staff member cleaning it up within seconds, but really, this place wasn't for me.  However I endured it since the girls were having SO MUCH fun. 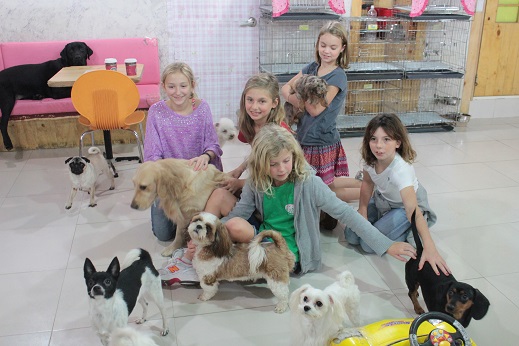 By this time the streets of Myeongdong were getting pretty crowded so I had the girls form a human chain where we walked and sang to our next destination.  SO MUCH FUN. 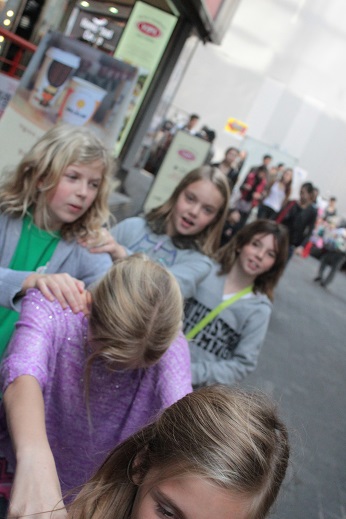 Hello ice cream!  Yes we will have a foot long ice cream thank you! 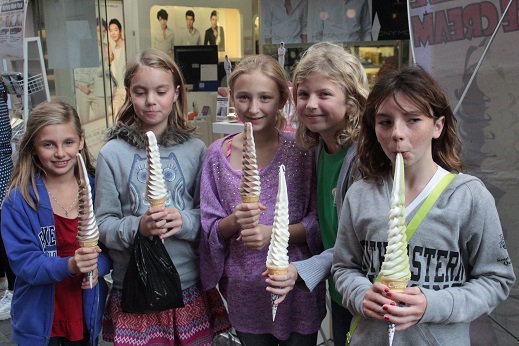 These little characters were all over the place!  I'm not sure what this one was advertising. 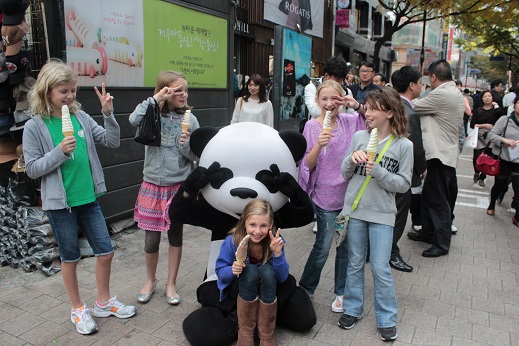 But this one is advertising a Nintendo gaming room!!  How fun is that, I was up for it, but the girls decided against it - they thought this would be better for one of the boys birthday parties. 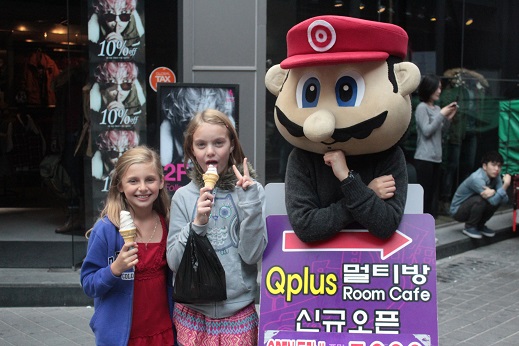 Finally after several hours 5 happy girls are back on the subway heading home to have a little birthday cake. 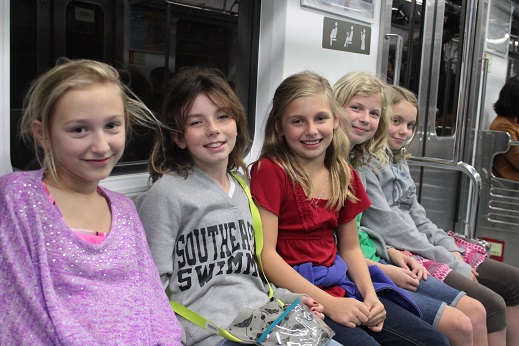 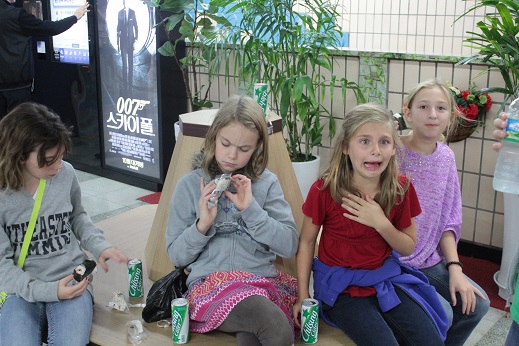 Back at home we all put on our new socks.... 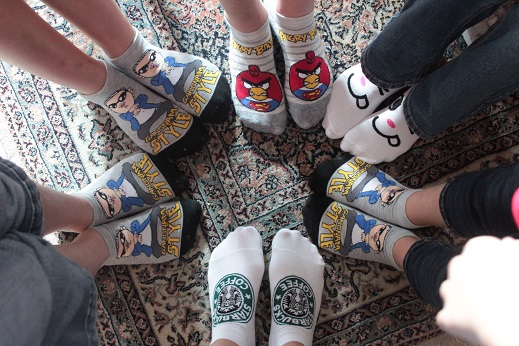 And sang Happy Birthday to one special girl! 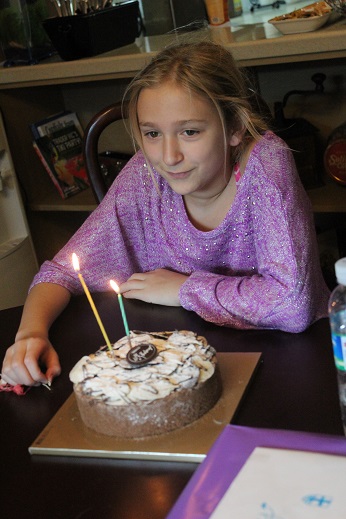 So even though this party could have been a complete failure, we persevered and we ended up having a total ball!
Happy 11th birthday my sweet angel!
4 Comments
Rachel
12/5/2012 08:34:19 am

My fave was the sock photo

Secretly your middle name is perseverance, isn't it?!

what a great party! loved the pictures!