One of the things I love about living in Korea is that Hubby and I have a regular date nights.  AND because we live in the world's second largest metropolitan area in the WORLD (over 25 million people - Tokyo has us beat by 7 million people - thank you Wikipedia) there is always something new and exciting to do!

Last Saturday Hubby and I had our date on and around the Banpo Bridge.  (Sounds boring I know, but stay with me.)

The Banpo Bridge is a major bridge in Seoul that connects Yonsan with Seocho districts.  We live the Yongsan dristic and we are a whole 10 minute walk from the Banpo Bridge.  I have crossed the Banpo Bridge many times by foot, car and bicycle.  I have always done this during early morning/day time hours.  I KNOW you are going to find this hard to believe, we have NEVER crossed the bridge at night.  Really! Weird huh?  We never crossed the bridge after dark EVEN though we had heard about the amazing waterfall and light show that happens nightly.   (What is wrong with us?)   So this past weekend as I was searching for a last minute date night I happened upon this article and guess what is in the top 10 'creative' dates in Seoul...you guessed it, the Banpo Bridge!

So, I don't know if this happens every Saturday night or not, but last Saturday night as Hubby and I were walking over the bridge at 8:20PM, just as the waterfall stopped, there was an amazing fireworks show that lasted for at least 15 minutes! 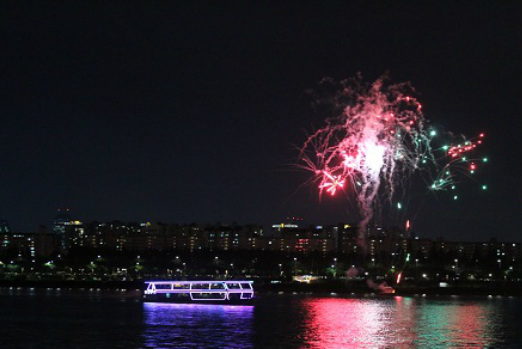 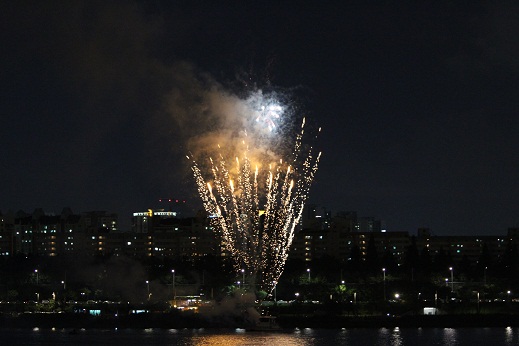 After the fireworks we continued across the bridge as the waterfall was going.  The Banpo waterfall is the world's longest bridge fountain that set a Guinness World Record with nearly 10,000 LED nozzles that run along both sides that is 1,140m long, shooting out 190 tons of water per minute!  (Again, thank you Wikipedia!)

The waterfall starts at 7:30 each night and runs for 15 minutes at a time every 30 minutes.

I only wish I were a better photographer so I could have better captured the beauty of the waterfall.
Oh, and the waterfall dances to music! 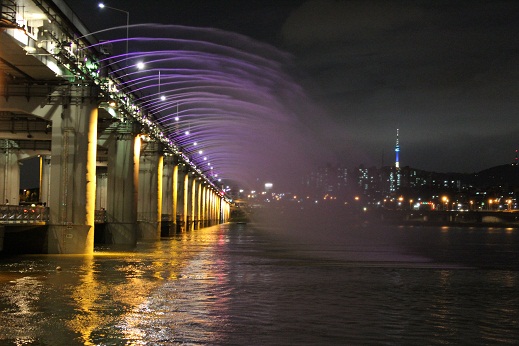 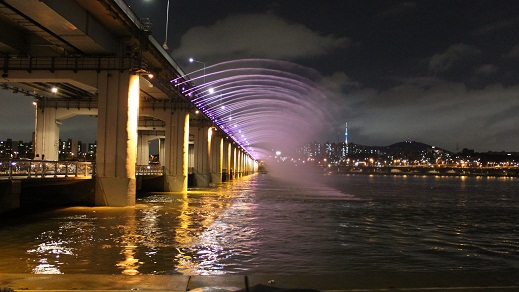 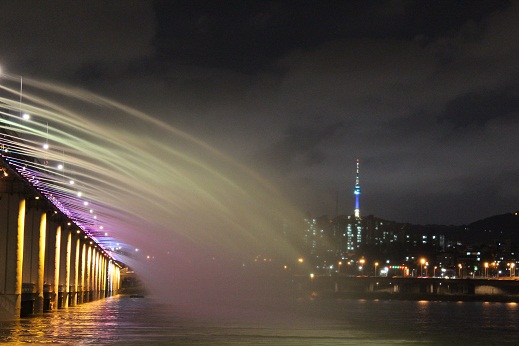 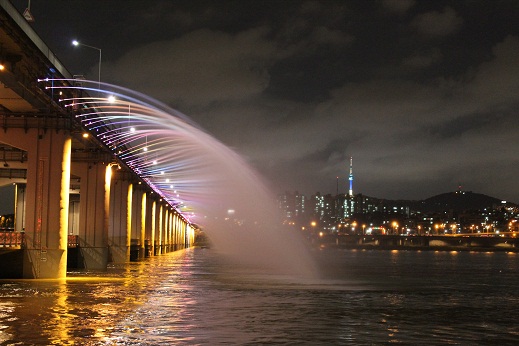 This date night would have been perfect had I not had a camera.  I was so in love with the Banpo that I kind of neglected the love of my life. For that I am sorry.  I am now imagining he *might* implement a rule that I can't take my camera on dates.

After sitting and watching the waterfall show for a while we took a little stroll...couple were picnicking in the park and hanging out under umbrellas enjoying the evening.

For a picnic you can bring your own or there is a Korean Chicken and Beer place where you can pick up a box of chicken, grab a couple of drinks and hang out in the park area.  There is also a convenience store to buy sodas, water and beer/wine.

This coming weekend as a special treat for the kids we are going to head over the Banpo, pick up some chicken and have a picnic with the kids.  Don't be surprised if you don't see pictures as my camera *might* not be allowed.
5 Comments
Molly
8/21/2012 09:11:30 pm

Beautiful! I always wanted to do that. I love seeing Seoul tower in the background at night!

I think the pics are fantastic : ) Very pretty.

I think the pics are fantastic : ) Very pretty.

A friend had told me about this last week and we were going to take them this weekend to go see it....beautiful!