Mactan Island covers is 25 square miles, and is home to roughly 430,000 people making it the nation's most densely populated island.

We stayed at Green Gate B&B on Mactan Island, it was in the middle of the island so super just a short cab ride to most things.  The owners Grant and Violet couldn't be nicer, but the house was a bit run down.  Hubby and I kept talking about how fabulous it must have been once upon a time and what we could do to fix it up - it truly could be a  magnificent house.  I can't believe I didn't take pictures of it...seriously I'm kicking myself!   The B&B is behind a huge gate and you feel totally safe behind those gates!

This is the roof top view and the waterfall (without water going into the pool.)  Since we were the only guest we had the place and the pool to ourselves which was an AWESOME thing to wake up to. 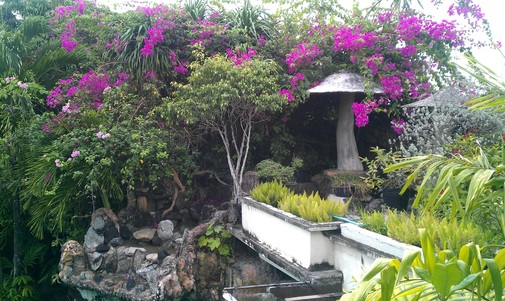 Breakfast was simple but nice....we ate outside by the pool. 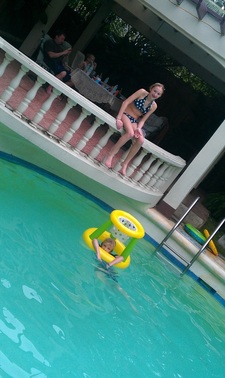 The younger kids had a great time playing in the pool while the teenager was no where to be seen for hours. :o) 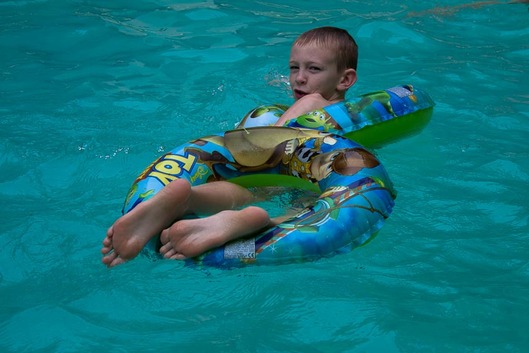 While on the rooftop I looked outside out gated area to see the view.
Goats and shacks.
I would soon come to discover this is Mactan Island EVERYWHERE except behind closed gates. 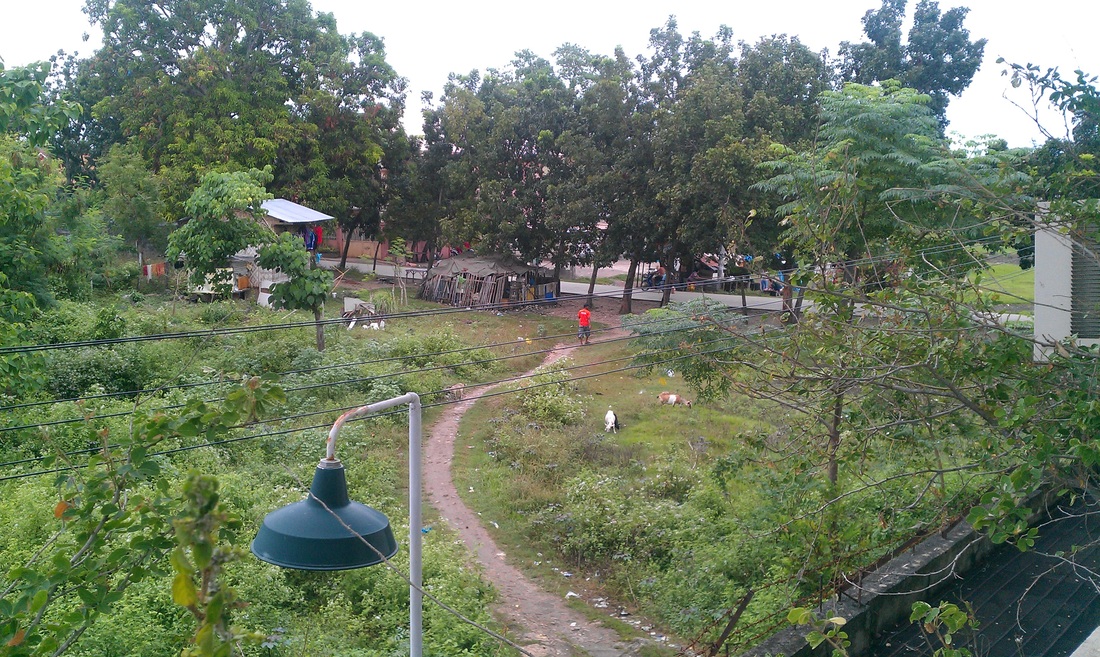 Unfortunately we couldn't exchange money before arriving in the Philippines and arriving on Christmas morning made exchanging money a little more difficult.  However Grant (the owner of the B&B) had some errands to run so he offered to take us with him.  This is when we got our first taste of the 'real Mactan' island, and let me tell you, I wasn't sold.  Most of these pictures were taken from a moving car.

Tricycle are the most common mode of transportation for tourist & locals. The price depends on the distance, 2 pesos for short trips, 12 pesos for longer trips.  That is any from 4 cents to 25 cents a ride!   STOP IT, I know! 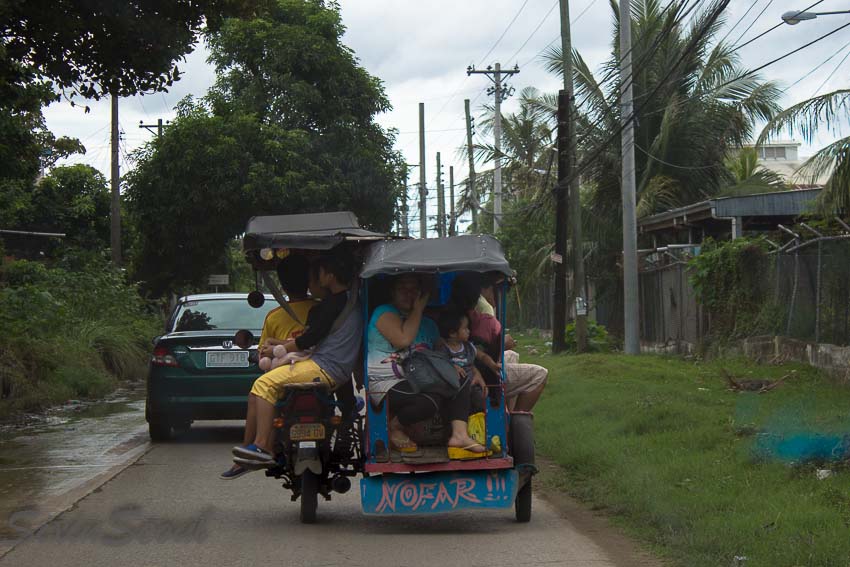 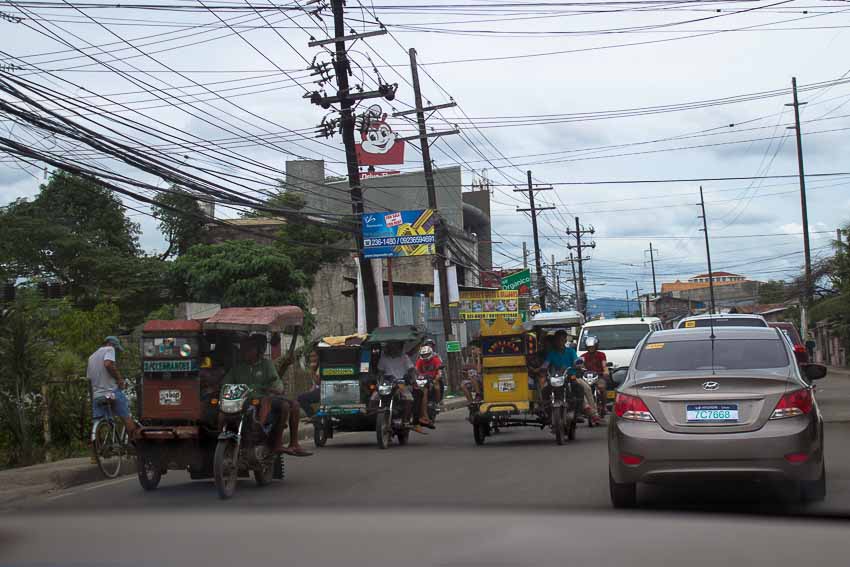 I spied some mangosteens on the side of the road so I ask Grant to pull over.  We were both completely SHOCKED when she tried to sell a kilo to me for 350 pesos!!  Are you kidding me?  That is almost $8USD!  I thought this was the Philippines people!

No, I didn't ask about the durians.  I have yet to try them.  I really don't think I ever will but maybe who knows.... 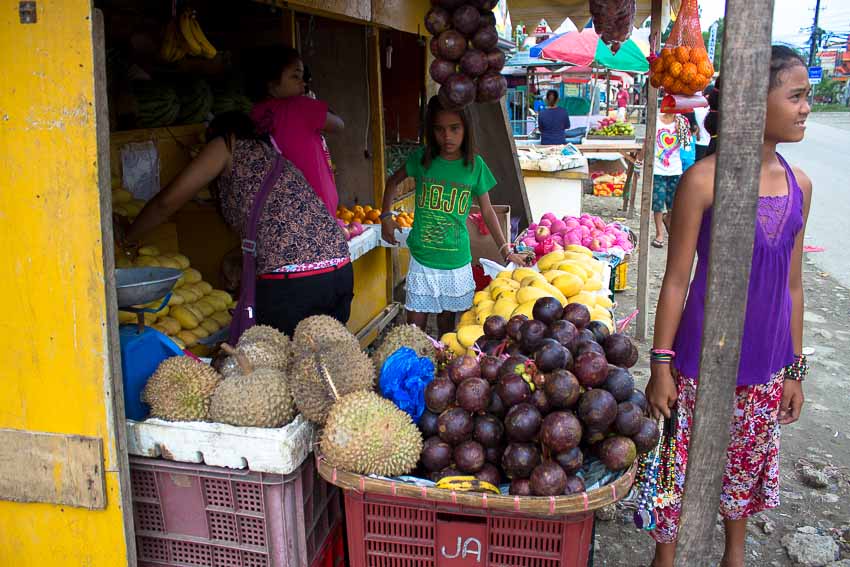 Grant and I trying to bargain at another vendor selling mangosteens.  Another no-go.  I know, I know I should have bought them anyway, I mean really how often do I get to eat that delicious little fruit?  I totally missed out. 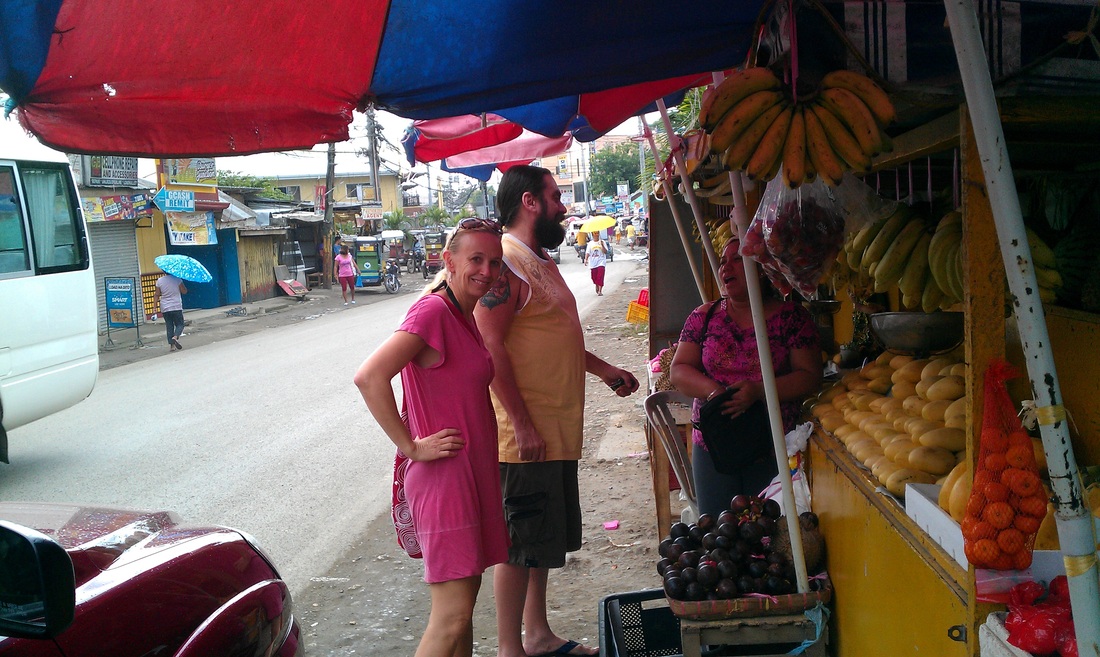 As we continued on our trek to find a money exchange place we saw more of the lovely countryside:
(insert sarcasm here if you didn't catch that...)

This is a typical store on Mactan Island. 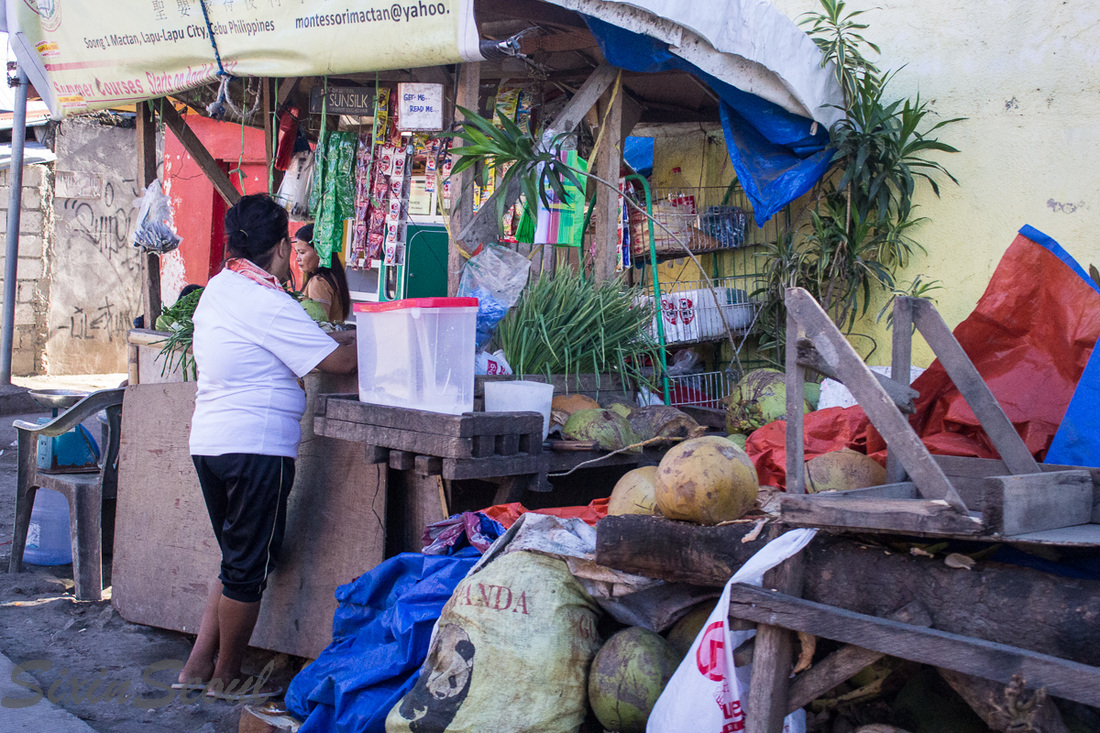 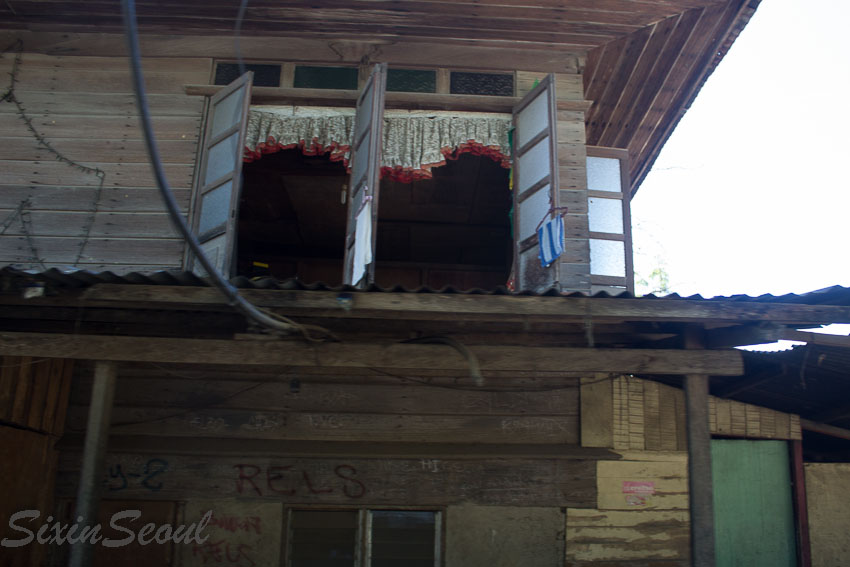 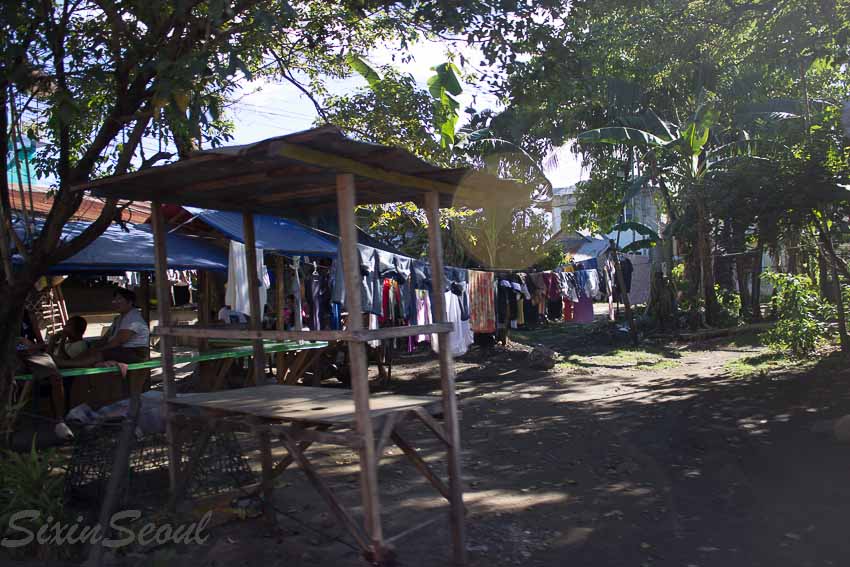 I really think the area to the right is a restaurant. 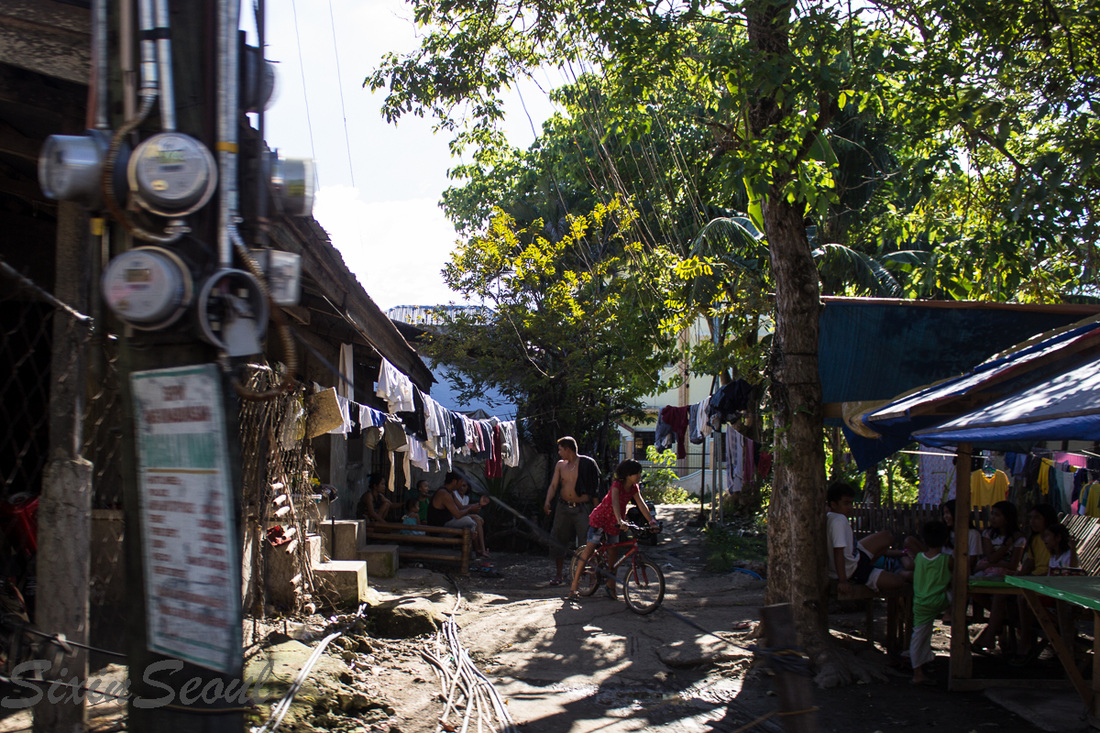 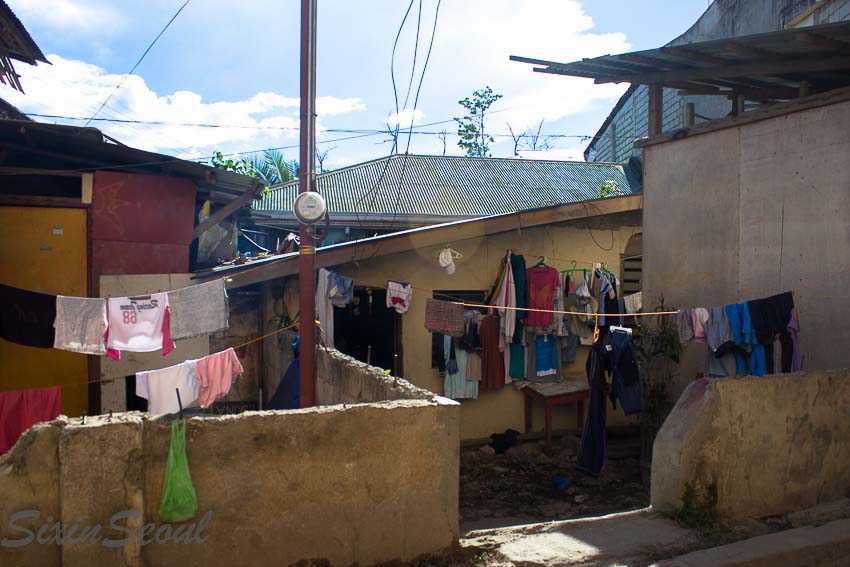 Goats and chickens were EVERYWHERE.
Chickens were tethered to things by a clamp around their leg.
Most goats roamed free. 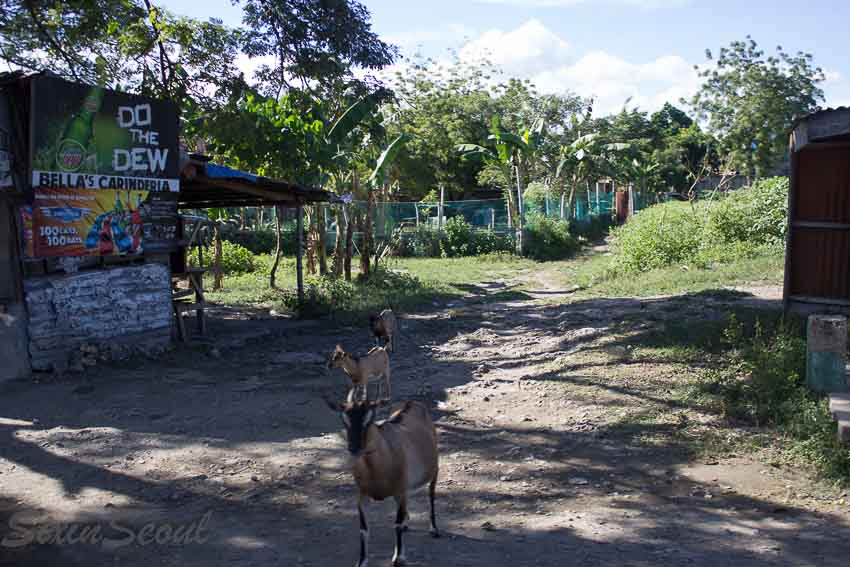 Not a spa I would ever want to visit. 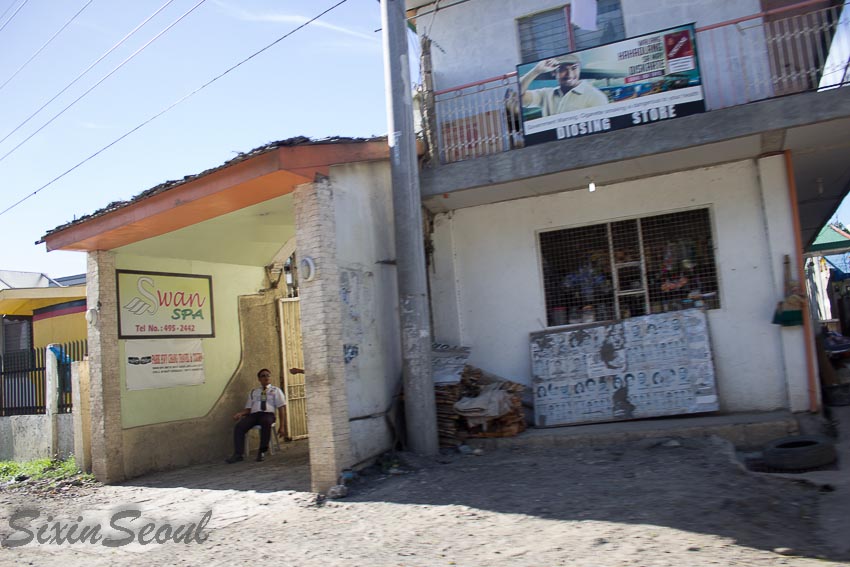 Another common mode of transportation it the Philippines is the Jeepney  (The van looking thing to the left).  Jeepneys are taken mostly by locals the price is 4 pesos for the first 3 kilometers and 1 peso for each kilometer after that.  1 peso equals about .02 cents US.  Jeepneys have a fixed route, similar to a bus in other cities. 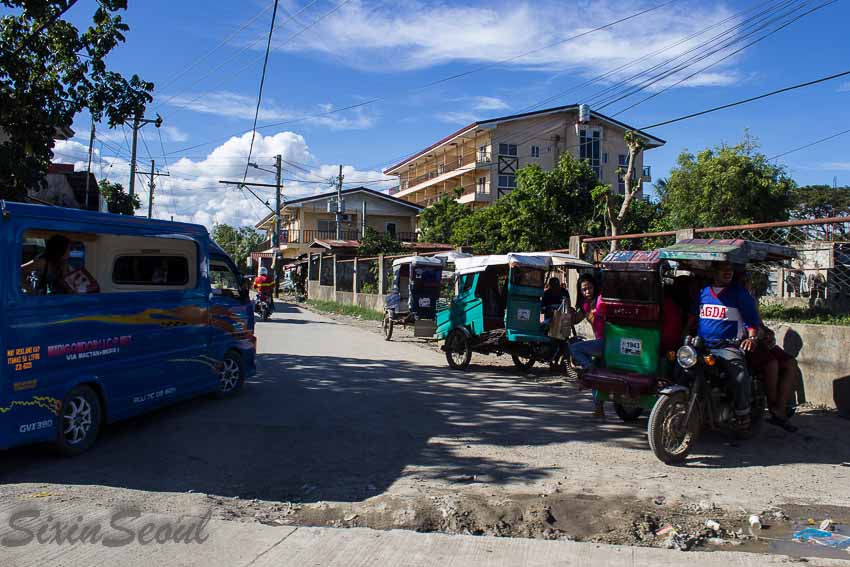 The possibilities of this being a store and those clothes being for sell is very likely.

OH, something I DID NOT get a picture of....
While we were driving I looked over and saw a half naked woman in a field - I had to do a double take.  She was squatting. As I continued to gawk she picked a leaf from a bush and wiped her ass.  TRUE STORY.  She was taking a dump in front of God and everyone passing by.

Needless to say my first impression of Mactan Island, Philippines has not been a good one.....
0 Comments