Confessions of a Crazy Mom..... 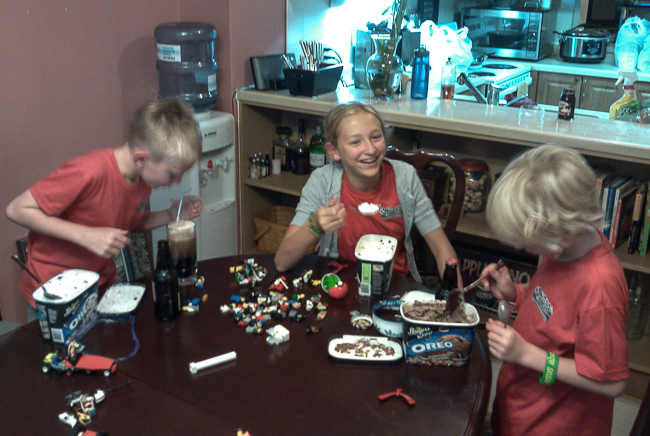 Family bond.  Even if I don't see it every day, my kids have an amazing bond and when the time comes to stick together they do.  I found out later they all believed each other and they were certain someone else came into our house and cut up the shirt.

Children are very forgiving - I need to take notes on forgiveness from my children.  I'm amazed at how easily they forgave me.  I need to be quick to forgive.

I have been in the same situation before. It hurts. While we try and teach our children all about life, they teach us what life is all about. You have awesome kids, thanks to an awesome mom.

Loved this, Trish. Thanks for your honesty :) I am living proof that prayer works, I'll tell you when I get home!

Oh Karen! I can't wait to hear. As you know you have most of Yongsan praying for you. :o)

Welcome to normal! Praying does work my Southern Belle friend! Cause without you, I never would've learned the bazillion different inflections and meanings for "Bless your Heart!"

Your heart is huge, don't be too hard on yourself and those kids are rock stars, like their parents!

Thank you for this!! I LOVE knowing that I am NOT the only one!! AND you ARE an AMAZING MOM!!!

You just made me cry! I love this!

Um, you made me cry. You do have awesome kids, you are a fantastic mom who had a bad day. You have to be fantastic to have such awesome kids. And yes, praying does work.

I was the teacher for the "praying works" VBS class. You have no idea how much I am rejoicing right now because they GOT IT! You have some awesome kids

I fell in love with this story right at the beginning when you (thought you!) were trying to get them to tell you the truth. I could see how important it was to you (and them), and really admired how adamant you were about instilling principles in your children and fostering trust and honest between your family. As I kept reading, I became more in awe of you and your kids. I hope I can be that dedicated to teaching my kids right from wrong, nurturing a close relationship, and being such a good role model to my children when I become a mother.

Oh man, girl! I have tears streaming down my face. Do not beat yourself up. You are a terrific mom, a terrific person and a terrific friend. That's enough terrifics to cover you.

aww....what a great post! I was reading this like a mystery novel....I was dying to find out whodunit!!

There's a saying that you can see the quality of the parents/parenting by looking at the children and this story proves how well you've raised your children.

Thank you for you kind words. :o)
And to think I almost didn't share this.

I loved reading this! Makes me miss y'all even more than usual.

To repeat what Teresa said I am full of joy because they got it. I have gotten to spend some time with them this week, they are awesome kids with an awesome mom.

That is too awesome for words, Trish. I think we've all had "mommy guilt" moments like that...I've even accused my kids of stuff that I realized later that I had done, myself, and my aging brain just forgot about completely, but your story had such a beautiful ending! Great kids! And amazing mom! XOXOXO to all of you!

love this post trish! hugs to you, my friend!

Bless you for sharing this! Only good moms can admit when they're wrong, so even though you falsly accused them, you came through and taught them another valuable lesson when you came clean and apologized so honestly. You sure are teaching these kids some incredible lessons and their reaction in the end shows what love and trust you have in your family. I agree with the other posters who said that this should be published in a magazine!

Tears . . . and such an amazing sense of 'OhmyGodI'mnottheonlyone!!'. Raising these awesome kids is an awesome responsibility, and sometimes it feels overwhelming. Knowing I have sisters in this task who are as dedicated to getting it 'right' as I am makes this quest a whole lot easier and a whole lot more fun!

Tears...I love it when God works like that! Awesome story...thanks for sharing.

love it!!! thanks for sharing.

I just came across your blog and read this. You made me cry! My babies are still young, but I'm SURE that I will find myself in this situation one of these days... Hopefully, when I'm feeling the guilt and beating myself up and probably crying too, I'll remember that I'm not alone. ;-) We all have moments of mom-craziness. Blessings to you and your sweet children!

Trish, I absolutely love your family!!! You're an awesome mom and you have amazing (and really messy) kids. remember finding toothpaste on the ceiling?!?! I laughed so hard!! I really miss you!! What are tickets to Korea going for these days?!?!

What a great story, thanks for sharing. You made me cry.

That's awesome Trish. Thanks for sharing.