To all my Facebook friends, remember a couple of weeks ago I posted this:  "Out of all the things I ate on our date last night, the pig intestines were the best."?  Well this is the blog you guys have been waiting for.  (And I'm sure you have been waiting on pins and needles, right? :)

It was hours before date night and I had planned NOTHING.  NADA.  ZILCH.  So I turned to my trusty friend Google, who never disappoints, and came up with the Gwangjang Market.  Gwangjang Market was the nation's FIRST market and I have NEVER been.  WHAT?!?!  Anyway, back to the nation's first market - it is the oldest (duhh) covered market and it is bustling!  The market sells mostly textiles, traditional Korean clothing (if you need a Hombak this is the place to go!), herbal medicines and vintage clothing and is only open during the day from  9AM-6PM. Since we arrived after 6PM we didn't get to see much of the selling in action, but from what I have read this is an area that not many tourist visit and it is very old school Korean.  But what we went for wasn't the shopping.  We went for the food.  Korean street food, oh baby!  There is nothing quite like Korean street food!

We started our journey out at the first little store we could find for a little brewsky.  And this guy below, well he just cracked us up.  I wish I would have gotten a picture from the front.  He was having a ball, invited us into his store and just danced around like a total dork without a care in the world.  He was awesome.
Our friend B always adds another level of entertainment to our date nights.  The little Korean lady had to come over and help him get this shirt on as she shook her head in laughter.  Don't worry, he bought the shirt.
Continueing  down that first alley of Gwangjang Market we happened upon this:
As we continued on our journey I knew we were getting close.   I had read that the spider like market had the good food stalls in the center of the market and as we walked the aroma was growing stronger with each step we took.  We started seeing a few vendors of herbal medicine and then gifts that they were packaging for Chusok.  And then the mother load of food stalls, we knew we had arrived!   If this had been my first stop in Korea I would have probably turned around and ran the other direction begging to return to the states, but alas it wasn't my first stop and I was (somewhat) excited to try a few new things!
As you can see there are TONS of fun things going on in this market! 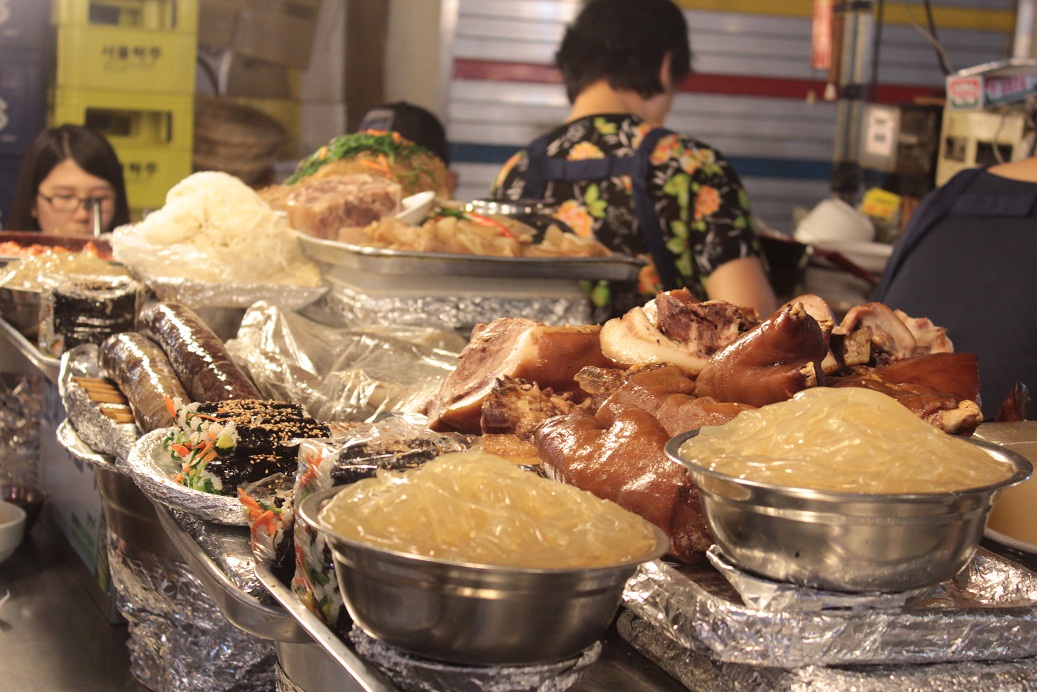 We finally found a stall that didn't look too intimidating.  It was a bibimbap buffet style booth, but it still had some of the 'good stuff'.  We sat down and started preparing our bibimbap and started talking to his local Korean couple. This young girl is the one that helped us on our food adventure.  She said she LOVES sundae and insisted that we try it, and so we did. 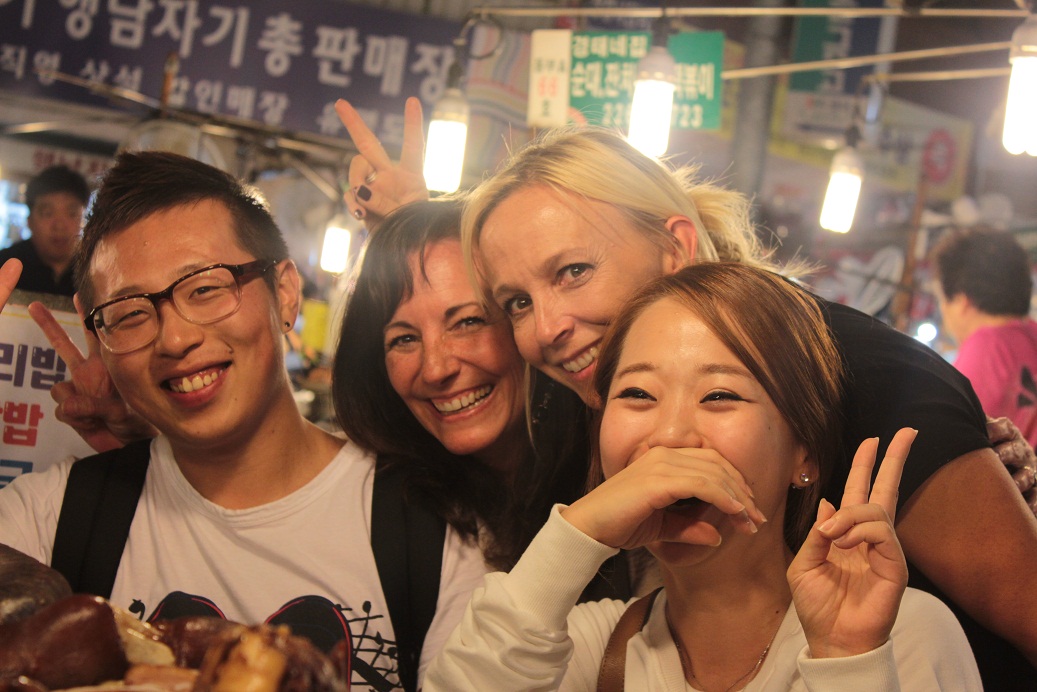 Sundae is that sausage roll looking thing below. Basically it is pig intestine stuffed with noodles and blood.
We also had a little the pig feet (jokbal)... 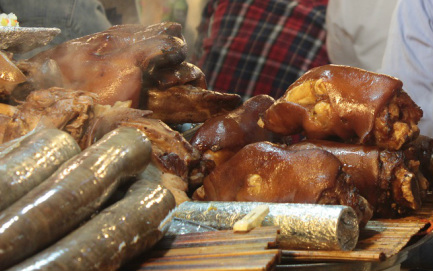 We followed everything down with a bit of makkoli, an alcoholic beverage made from a mixture of wheat and rice, which gives this Korean goodness it's a milky, off-white color, and sweetness.... 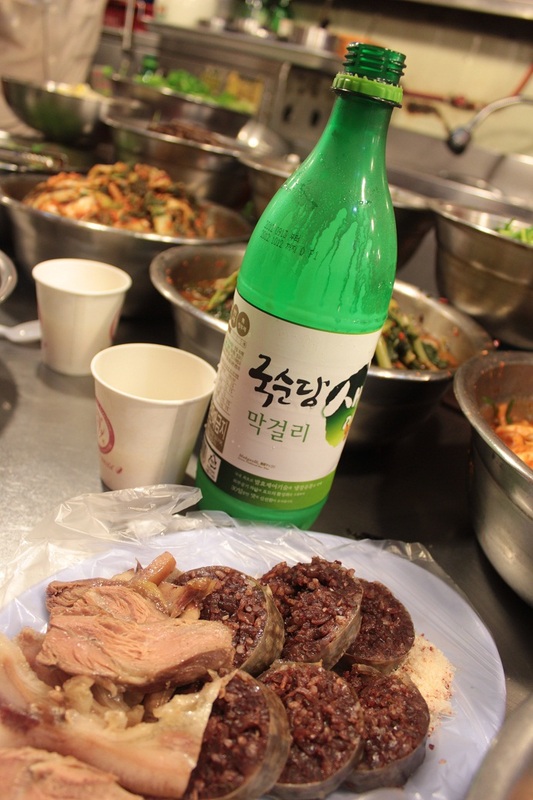 Sundae wasn't bad at all, in fact I ate Hubby's as well as my own.
True story.
And jokbal aka - pig feet (pictured) tasted like, well pig. No big thang there. 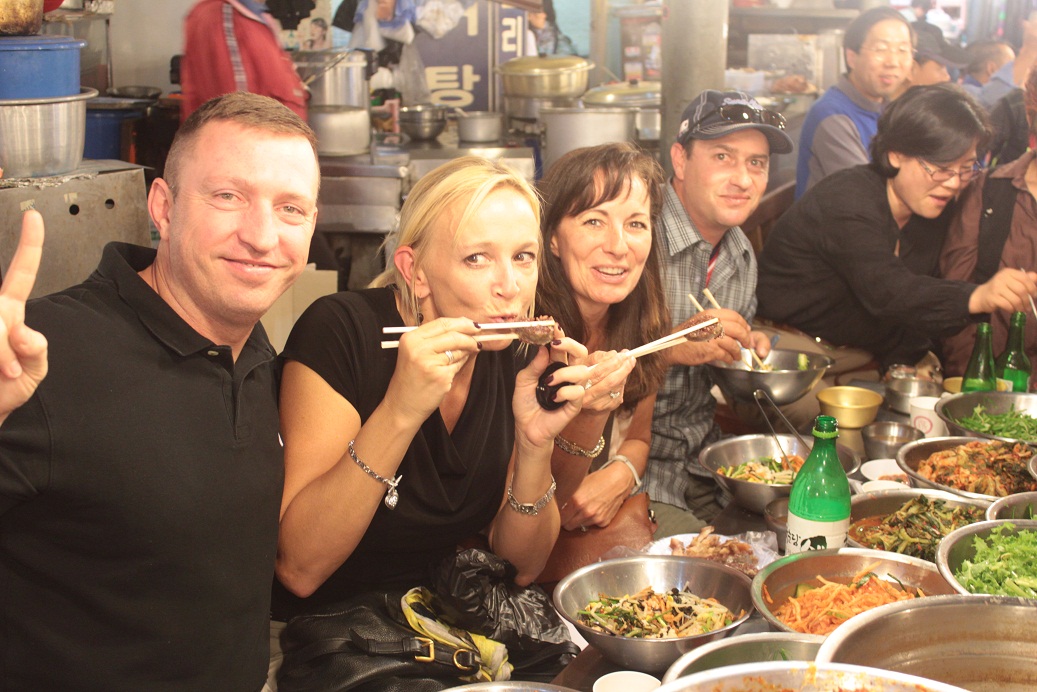 The next item to tickle our tastebuds was deep fried pig skin (I don't know the Korean word for this tasty treat), but hey if I can do sundae I can do pig skin, right?  I'll just put it this way; I would rather eat an entire plate of sundae than to eat this chewy substance again.  It wasn't terrible, but I don't ever feel the need to eat it again. 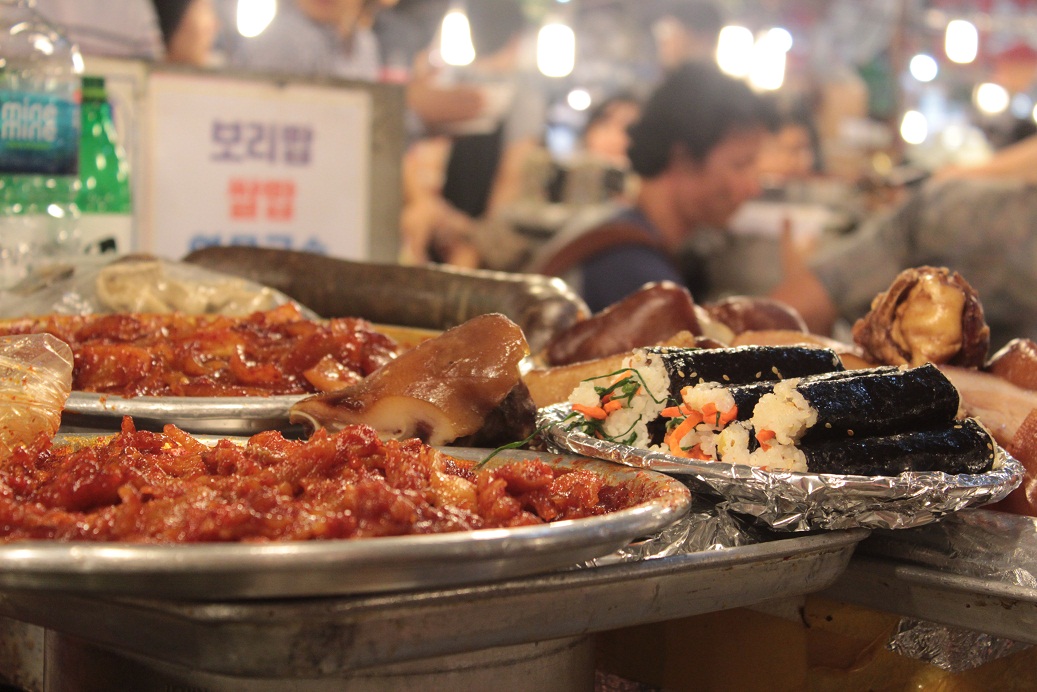 Next up on our list of luscious lickables was this: 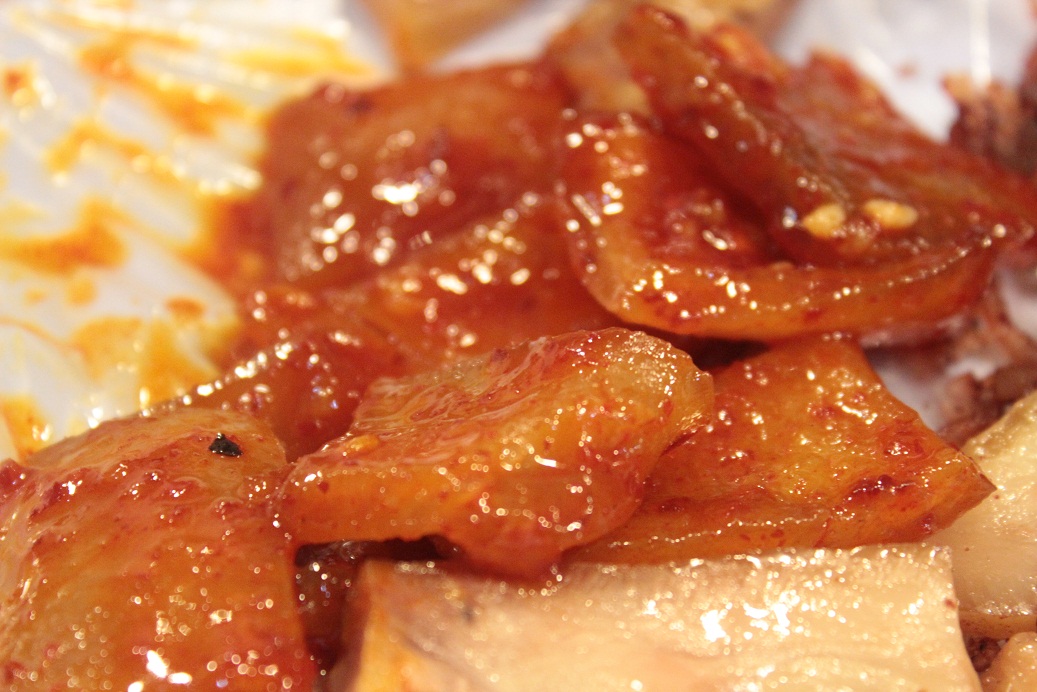 It doesn't look that bad now does it?  I'm not exactly sure what it is, but you are supposed to eat it warm.  The local Koreans that we were hanging with told us it was, are you ready for this?  Pig cartilage, from knees and elbows.  I tried looking it up and I am finding that it is another style of pig skin.  Either way this was by far my least favorite dish.  I couldn't spit it out as that would have been rude, so it was followed down by an entire bottle of Makkali (OK, not really, but it sounded good.)  This is one Korean dish that will not be passing through my lips ever again.  I would rather eat a plate of deep fried pig skin before eating this delicacy again.

After that things just got interesting.  This guy all dressed in white with his spray painted motorcycle and boots, horn blaring came driving through this market where it is hard to even walk around!  How he got his motorcycle through these alleys are beyond me.  You could tell the people working the stalls were not very happy with him. 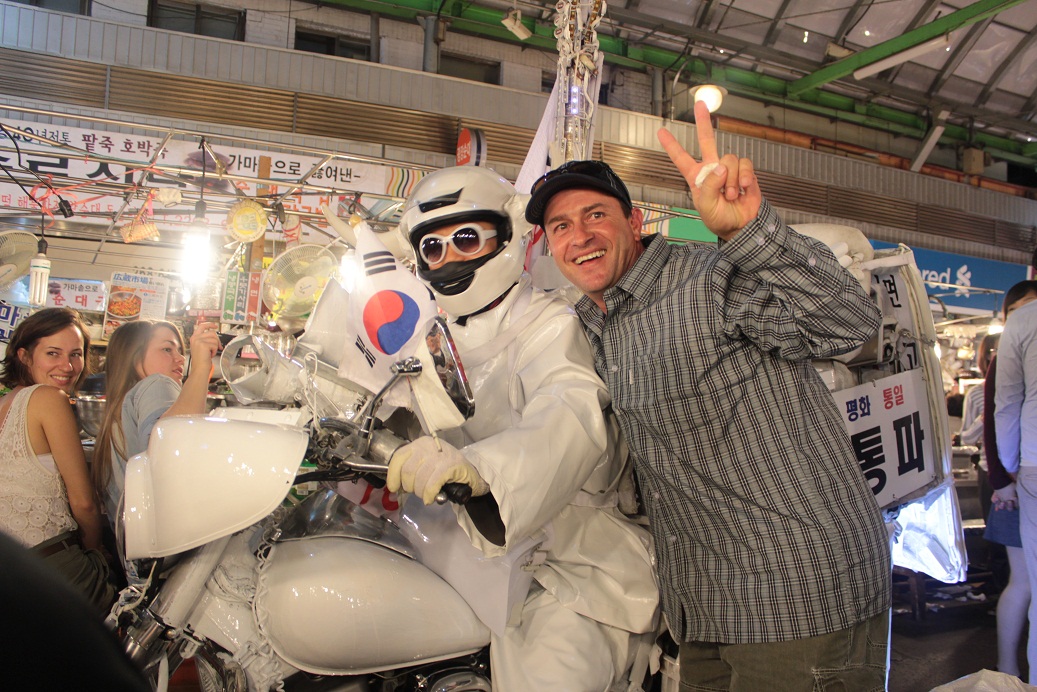 Once our bellies were full we head out and took a stroll down the Cheonggyecheon Stream where we happened upon a young singer performing. 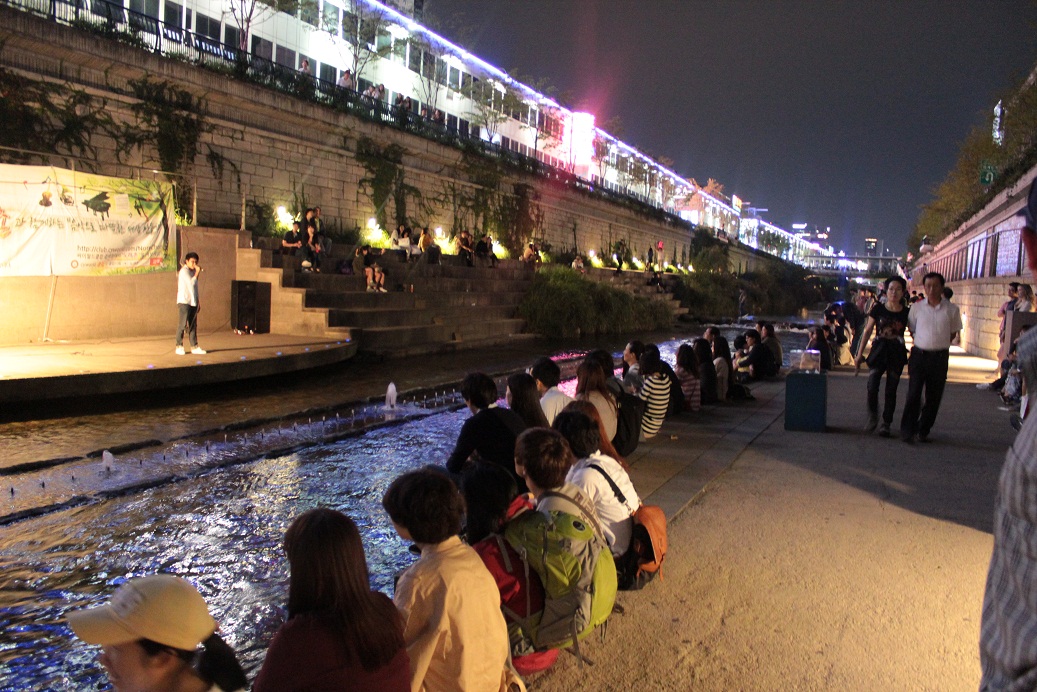 We ended our night with a little night shopping in Dongdaemun where Hubby picked up some really hot glasses and I got myself a super cool old lady hat.  :) 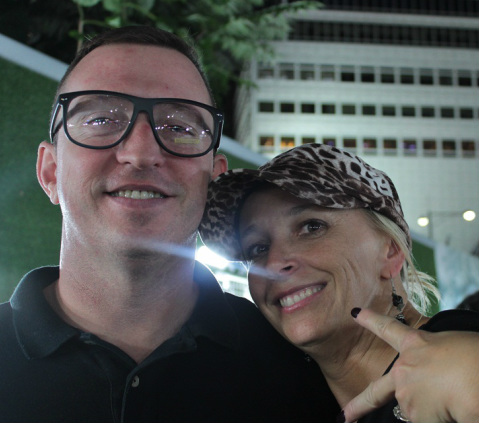 There is never a dull moment when living in Seoul! :)

I'm sure there are many ways to get to Gwangjang Market, we went by cab/subway -
Jongno-3-ga Station Exit 12.
Walk straight for a few blocks, you will come to a bigger intersection, look to your right and you will see the entrance to the Gwangjang Market.
Enter and walk down the alley for quite a while...you will start seeing food stalls, but don't stop until you hit the mother load and start seeing places to sit and eat.  You will know when you have arrived.
Good luck and happy eating!! :)
4 Comments
Connie
9/27/2012 02:52:50 pm

I seriously want to throw up.

omg...what on earth?? i just threw up in mouth a little.

I took my mom there to see the sites but we DID NOT eat that stuff!