HOLY GOODNESS.  This recipe is a little bit of heaven.  Fresh clams are the way to go!   I was a little nervous about making this recipe as I have never made clam chowder before.  Boy 1 is a HUGE fan of clam chowder and is a huge critic of food in general  (his poor future wife. She probably won't cook.)  I was a little afraid this would not be up to par, but in the end it was!  He said this was the best clam chowder he has ever eaten (in his 16 years of life..  :o)  And I must admit this was pretty darn good!  It could have been a little thicker and next time I will mash a few more potatoes in it and let it cook a tad bit longer.  I take no credit for the recipe Epicurious didn't fail me - for the original recipe click here.
I only made a few minor changes.

This recipe takes a little advanced planning but it is TOTALLY worth it!

Now go out and buy some clams!!

Fill two large pots (or two sinks) with cold water. Place the clams in one pot of water, discarding any dead ones or clams with cracked shells. Gently move them around in the water and let them soak for a few minutes, then lift them out and place them in the other pot of cold water. Rinse the first pot and fill it again. Move the clams around again, then transfer them back to the clean pot. Continue to switch the clams back and forth, letting them soak for a few minutes each time, and then lifting them out of the pot, until the water remains crystal clear. The process should take four or five soakings.

**Note if you buy your clams fresh in water this process doesn't take as long as if you plucked them from the ground yourself.

.
Put the 3 cups water in an 8-quart pot, cover, and bring to a rolling boil. Quickly but gently place the clams in the pot and cover again. After 4 minutes,remove the lid and quickly stir the clams with a wooden spoon, trying to lift some of the clams from the bottom to the top so they will cook evenly. Cover and continue to steam for another 4 to 5 minutes. (The broth will most likely overflow just as the clams have finished cooking.) All the clams should be open; if not, steam
them a minute or two longer. Remove the clams and strain the broth; you should have 4 cups. 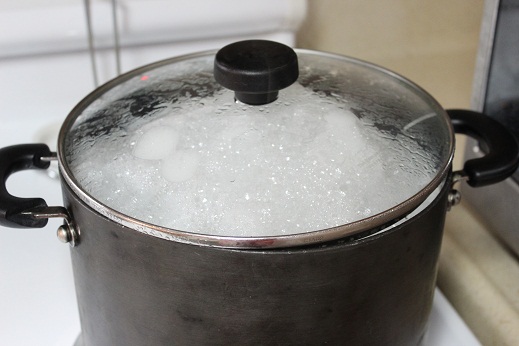 They ALL opened!
When the clams are cool, remove them from the shells - if you choose.  I like to leave some of them in the shells.  Cover and refrigerate until later. 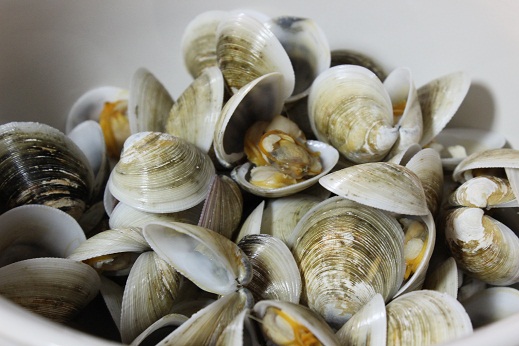 Aren't they beautiful?
Heat a 4- to 6-quart heavy pot over low heat and add the diced salt pork. Once it has rendered a few tablespoons of fat, increase the heat to medium and cook until  the pork is crisp and golden brown.

Add the butter, onion, celery, thyme, and bay leaves to the pot and sauté, stirring occasionally with a wooden spoon, for about 10 minutes, until the vegetables are softened but not browned.


Add the potatoes and the reserved clam broth. The broth should just barely cover the potatoes; if it doesn't, add enough water to cover them. Turn up the heat and bring to a boil, cover, and cook the potatoes vigorously for about 10 minutes, or until they are soft on the outside but still firm in the center. If the broth hasn't thickened lightly, smash a few potatoes against the side of the pot and cook a minute or two longer to release the starch. 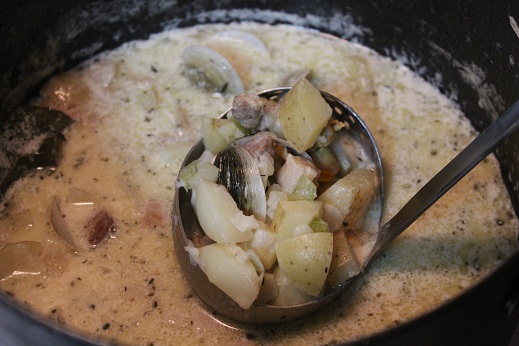 Not quite thick enough, but too good to care!
Remove the pot from the heat. Stir in the clams and the cream and season to taste with black pepper and possibly a pinch of salt (the saltiness of steamers varies). If you are not serving the chowder within the hour, let it cool a bit, then refrigerate; cover the chowder after it has chilled completely.  Otherwise, let it sit at room temperature for up to an hour, allowing the flavors to meld. 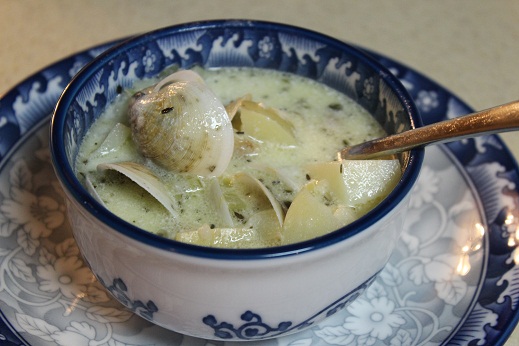 Will definitely have to attempt this

I'm trying this one when my folks visit as no one but me in my home likes clams.. Tragic!!!