Our Seoraksan National Park Weekend Getaway - Just Getting There Was an Adventure....

This past November we all hopped in the car and headed to Seoraksan National Park in our awesome $2,000 hooptie that I wasn't sure would make it.  I mean she has been sputtering, dying and really just being down right feisty for the past couple of months - I've been praying that she will just make it till we move in June.  I was prepared to have another Korean adventure of being stuck on some random street up in the mountains while she was being repaired.  Good thing that didn't happen.  Ends up I think she just needed to get out and feel the breeze on her bumper and get some fresh air in her engine.  Anyway she's been running awesome since we took her over 20MPS.  :o)

SO, I think it took us about 3.5 hours to get to Seorak (that's what happens when I don't post right away...I forget.  I need to start taking notes) and we saw things we can't undo.  I'm going to share them with you.  If you have little people in the room, well, it is probably too late....I'm sure they already saw this picture.  I'm sorry.  If you want you can have them call me and I will explain it to them. 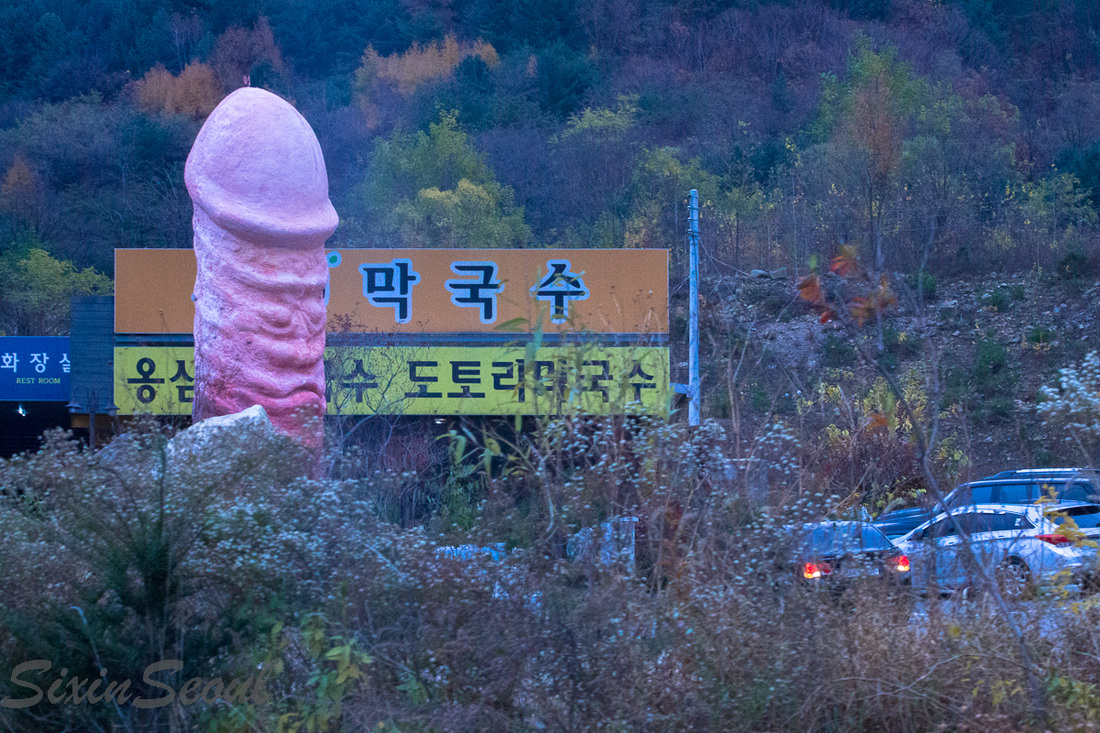 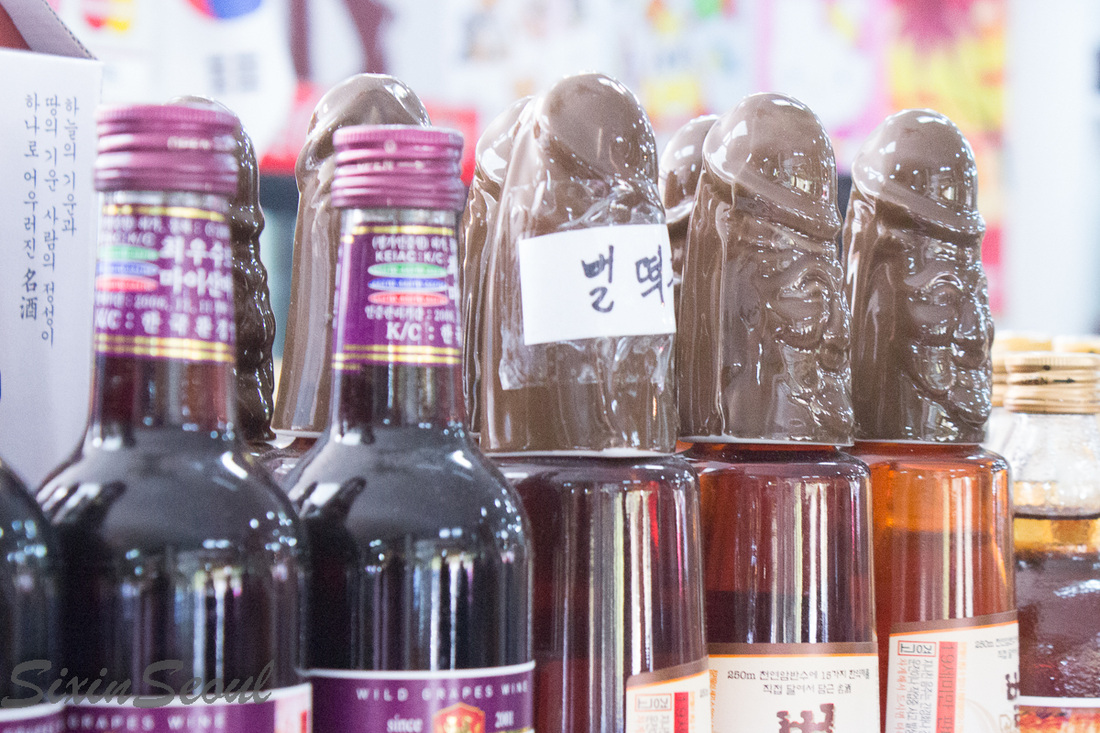 While on the way to our hotel we say signs for the DMZ, so we detoured.
We passed through too man rock drops.... 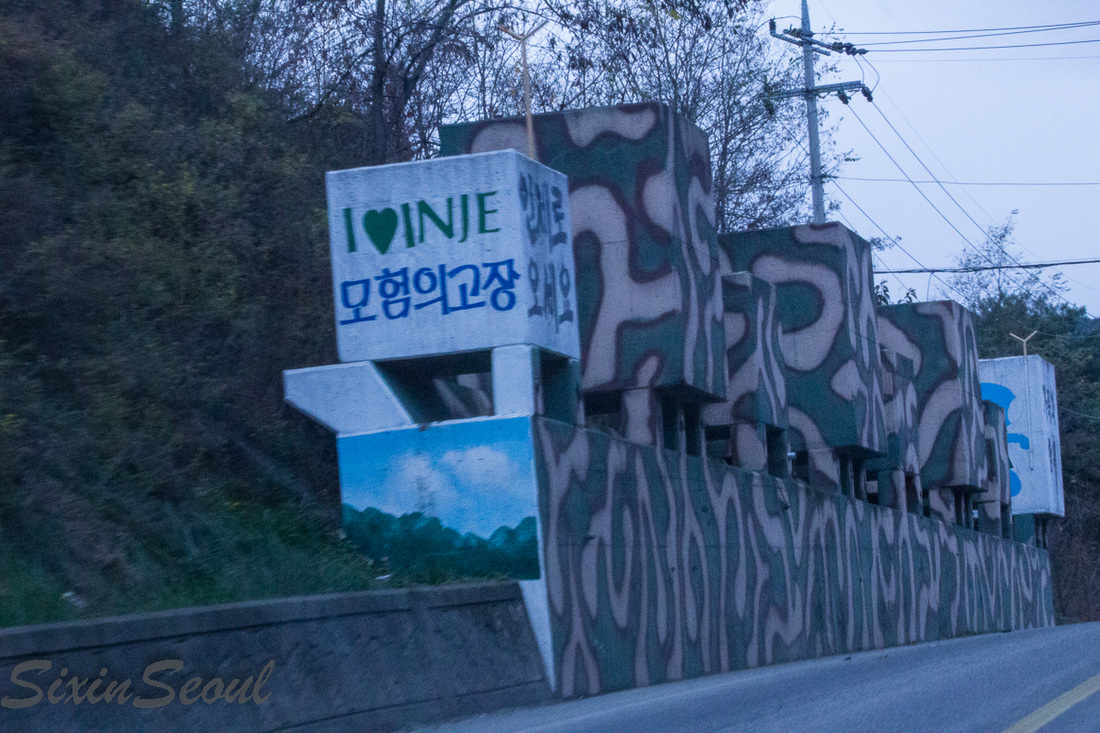 And I ask hubby to drive extra soft though the mine fields.
Are you kidding me?!
I was afraid if we had a blow out or our hooptied died we would surely be goners.
Thank goodness that didn't happen. 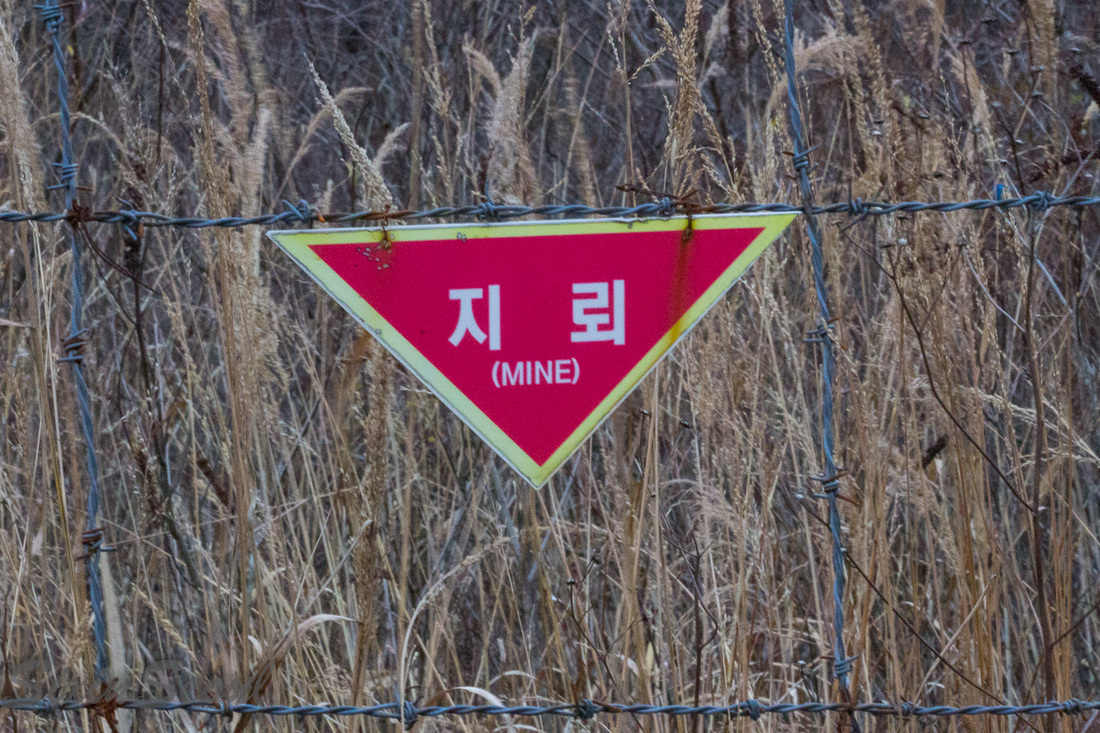 This is North Korea.
We weren't allowed to take pictures but I'm a rebel.
I was that close. 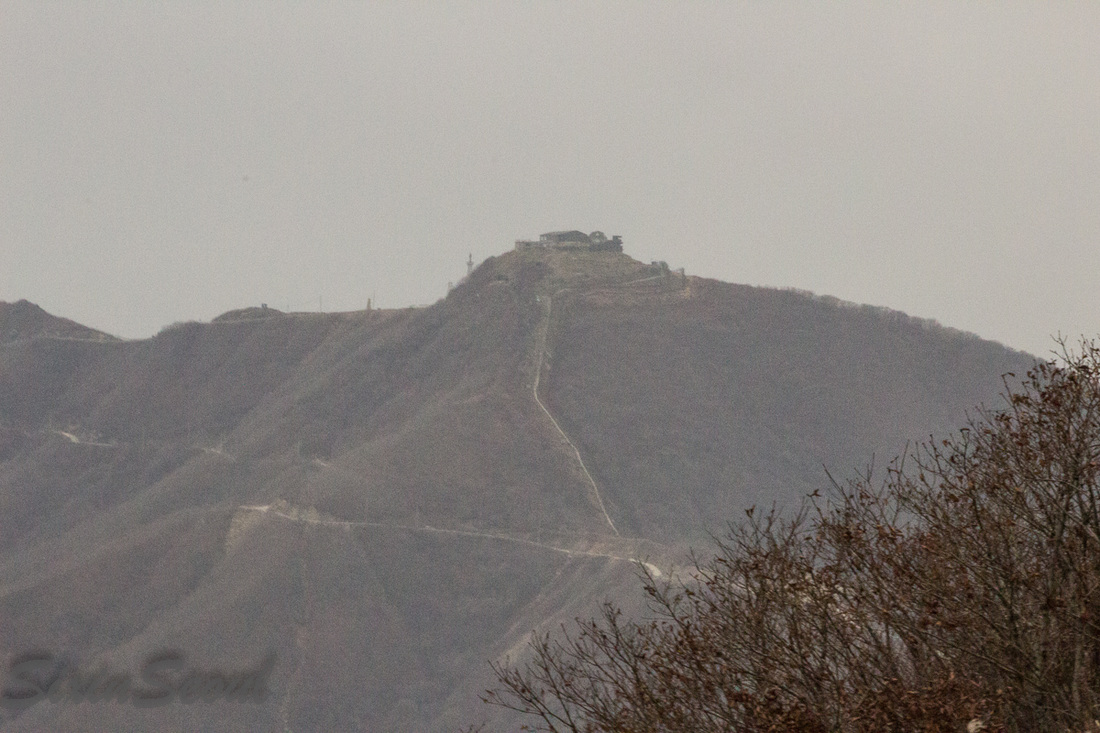 As we were trying to find our hotel all the young'ens were complaining that they were STARVING so we found a place and went in.  Only to find out this is what they served: 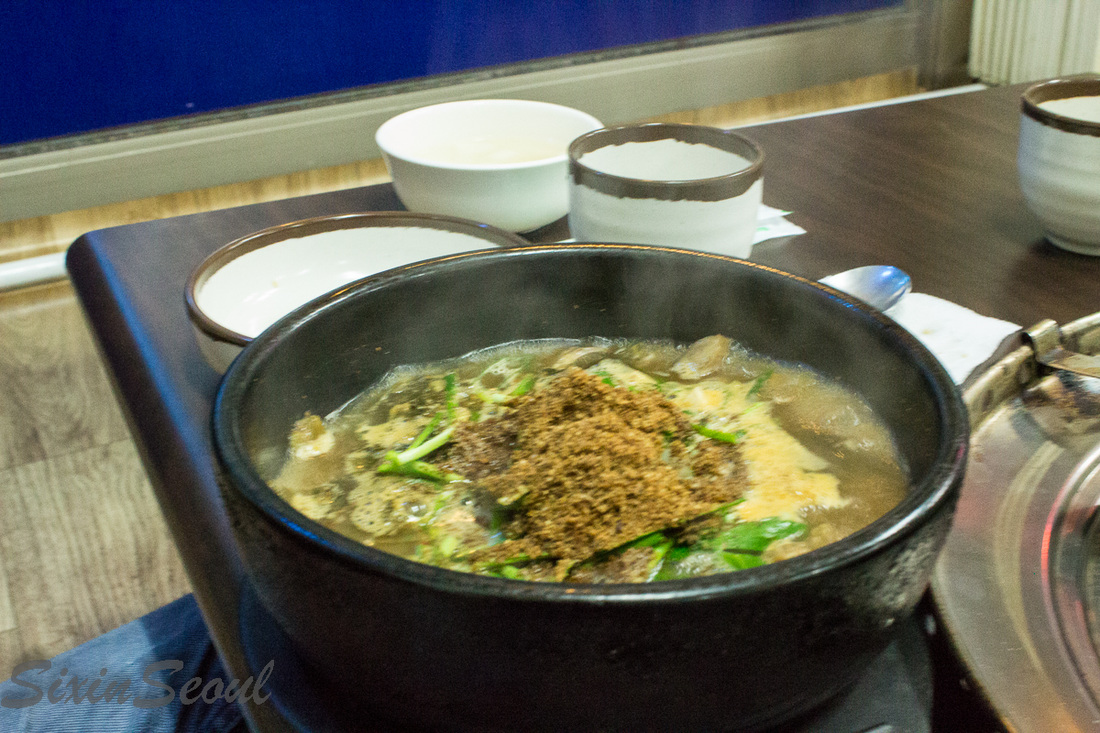 OK...this is the part of my blog where you might decide we need to break up.  If that is the case so be it.  It was nice knowing you.  But we had to.  We were there and while in Korea you know...

If you don't want to know what we TRIED, skip this part.  Don't read anymore.  Go down to to the picture of the piles of poop pillow hammers.  I'll leave some empty space.  Close your eyes and scroll.

It was dog.
I know, I know.
I never planned to try it, but when you happen upon a restaurant that serves it and all the stars are lining up....well you do want the universe is asking you to do.....I know many of you would not listen to the universe and you would  turn around and RUN, but not me....I embraced it.  Sucked it up and continued on.
Plus, I am here to tell you that they don't kill your pets...they breed a certain type of dog for food.
Just like cattle, pigs and chickens.
And dog as food is REALLY, REALLY bad.
My stomach churned before I tried it.
The smell was enough to knock your socks off.
And when it hit my mouth I wanted to spit it out.
I'm talking NASTY.

Good thing they had other things to eat.
It was never on my bucket list, but I added it and checked it off.

YOU can start reading again!
Korea is not only obsessed with the penis, they also have an odd amount of poop things here too.
Poop hammers.
I don't even know. 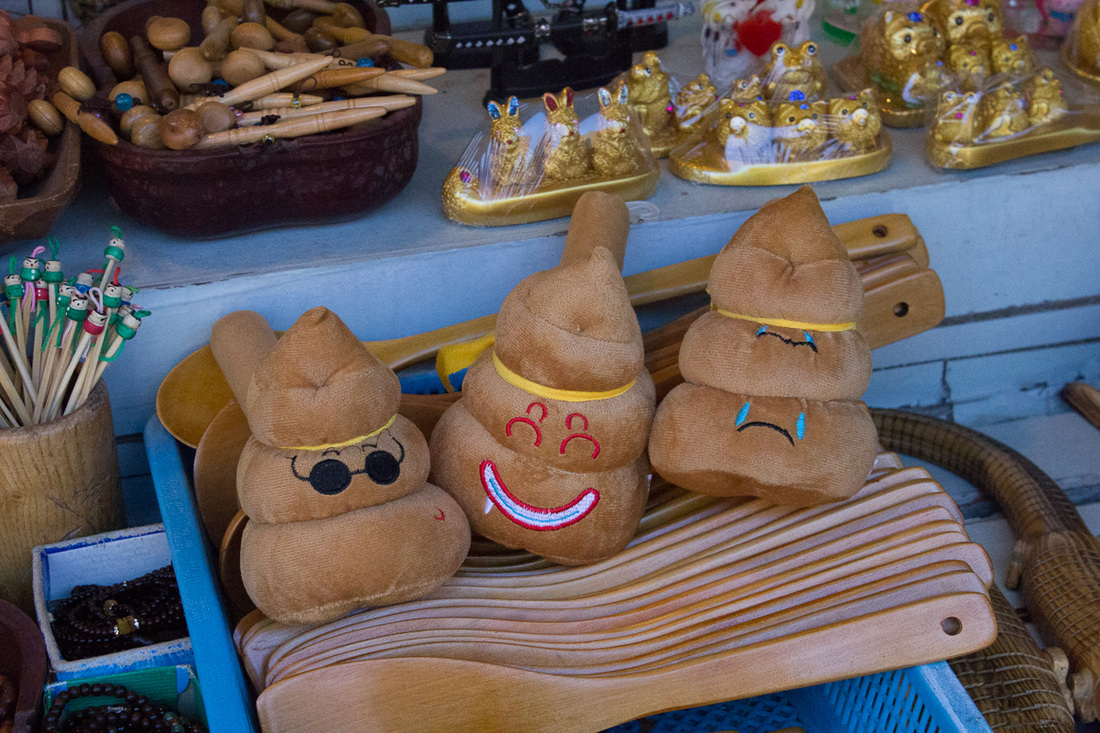 Trish, it is not true that they only use one (news stories actually claim two breeds are so used) kind of "food dog" raised for slaughter, as many would like to believe. If you looked at the websites that follow such things, such as Animal Rescue Korea, as I do, you would have seen the photos taken at the Moran meat market of dogs for sale for meat. Greyhounds. Boston Terriers. Great Pyranees. Collies. Cocker Spaniels. And on, and on. The "food dog" fallacy is disinformation spread by the ROK as an excuse. I am horrified by the practice, and am shocked that it continues. Now, I know that you may not want me on your blog after this, and I understand. However, I thought it better to address these facts.

Hey Peyton - I have no problem with you coming to my blog and posting your thoughts as long as you are not mean to me, and you were not. You stated facts that you know - way better than me because I have done no research.
I knew I was opening a can of worms when I wrote this piece.

If you want to know more, Google "dogs at Moran meat market south korea". This is only the most notorious market. According to reports, the vendors prefer to buy companion animals rather than the "raised for food" dogs because the former are priced per dog, while the latter is priced by the pound. The methods of slaughter are particularly horrific.

I appreciate your understanding. If you want to know more, Google "dogs at Moran meat market south korea". This is only the most notorious market. According to reports, the vendors prefer to buy companion animals rather than the "raised for food" dogs because the former are priced per dog, while the latter is priced by the pound. The methods of slaughter are particularly horrific.

It makes no sense to me. ROK is among the worlds wealthiest and most advanced nations. Why would they have such terrible food especially when it. ( as you said) smells and tastes so terrible?