Check it out!  Look who I met.  Yeah, I was one of those - he had just finished his meal and I ask him if I could take a picture with him. He was very gracious and asks very quizzically, "You know who I am?"

I have to admit that I only knew who he is because someone told me.  But now that I have googled him - WOW!!

For those of you that don't know who this is, it's Tim Hawang Young Min, better known as Tim.  He was born and raised in Phili and is now a Pop singer/Actor here in Korea.  He has released at least 5 albums and has appeared on many Korean TV shows and at one time had his own show on MTV. 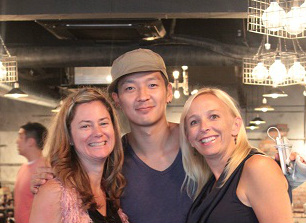