Tuesdays With Trish - Campkah or Samarikant - Russian or Uzbek - I'm so Confused.

Sometimes we just have WAY too much fun!
Kelly (blue shirt) was our fearless leader for this lunch bunch. 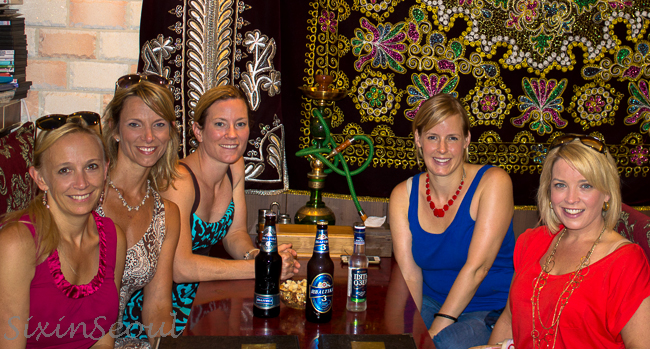 She took us to what I thought was called Campkah.  I mean look at the sign below.  Wouldn't you think that is the name of the place?  But no - if you do a search you will realized that the real name is Samarikant.  If that isn't confusing enough for this North Texas girl....the food is Uzbek.  Really?  I thought it was Russian.  I had to Google Uzbekistan.  I'm sorry if that just made me look less intelligent, but really, I am lost.  SO what I have learned is that Uzbekistan is located in Central Asia, south of Russia. It shares most of its borders with Kazakhstan.Uzbekistan is in Central Asia, north of Turkmenistan, south of Kazakhstan.  Are we clear now?  That is the food I ate on this day.  I'm still not sure of everything I ate, but I was VERY happy with the end result.  Oh and Kelly used to live in Mongolia....that is why she picked this restaurant.  (WHAT?!?!) 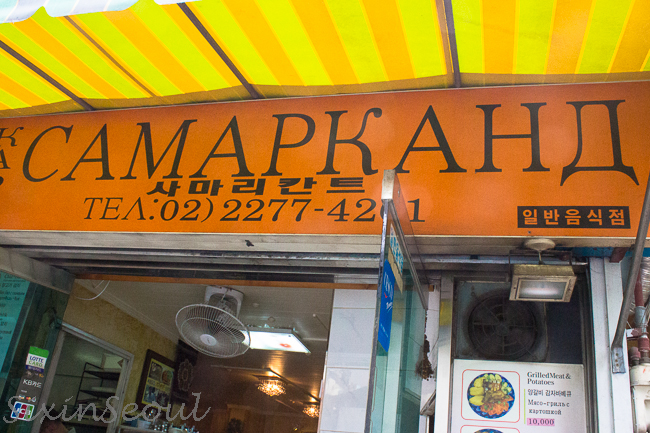 To my delight they had amazing Russian vodka at super low prices!!  The bottles were only 10,000 won each.  Of course since we were here we had to partake in Russian/Uzbek (still super confused) tradition and share a bottle.  We also tried the beer.  I like how they number their beers.  9, 7, 6 & 3.  3, a lager was my favorite.  One of those was a dark beer which I tried and liked & was totally shocked that I liked it because on a normal day I do not like dark beer.  Maybe it was the vodka?
After the vodka we considered smoking the hookah pipe, (you know - when in Rome, or Russia or Uzbekistan...) but in the end decided against it and we just forced Kelly to pose for a picture.  :o) 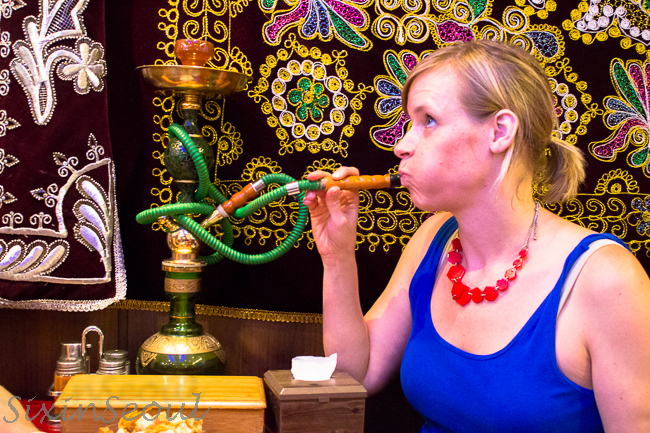 I'm not really sure what all the foods are in the next pictures, but I can tell you that as I am writing and looking at these pictures my mouth is watering.  The food really was delicious.  Most of the food items have lamb in them, but if you don't know what you are eating you will devour it and not even know you just ate lamb...just ask the 2 girls at the table that "don't eat lamb".  They had no idea and only freaked out AFTER we told them what they ate. 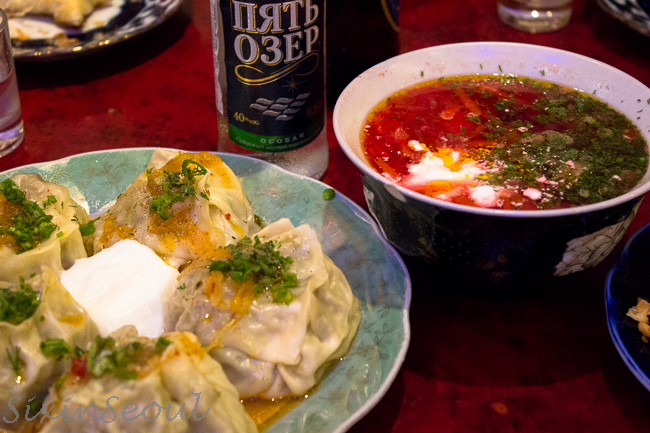 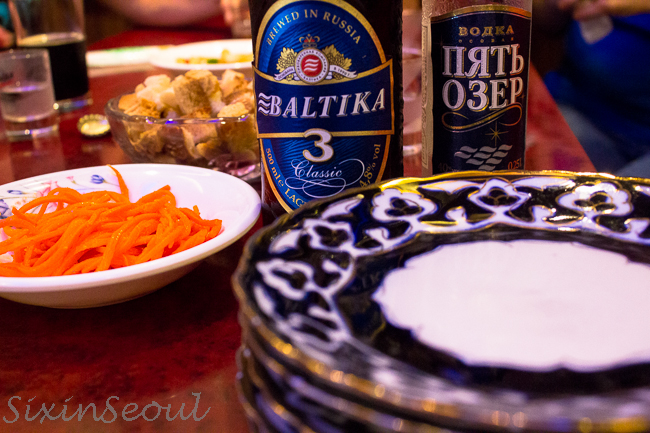 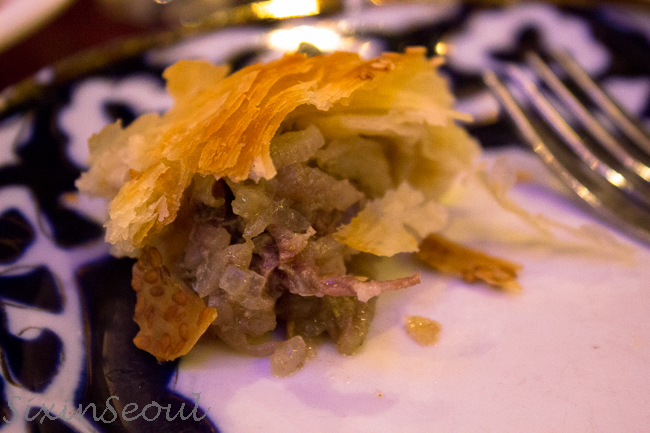 I do have to make a special mention about the kababs.  HOLY GOODNESS.  Best kebabs I have ever eaten!  We ordered lamb and chicken.  I thought the lamb was good...totally tender,amazing flavor and just totally goodness all the way around.   BUT THEN I tried the chicken kebabs.....totally blew the lamb kebabs OUT OF THE WATER!  They were so moist that the juice would squirt out as you took a bite.  They were tender, juicy and just melted in your mouth.   If you go make sure you order the chicken kebabs! 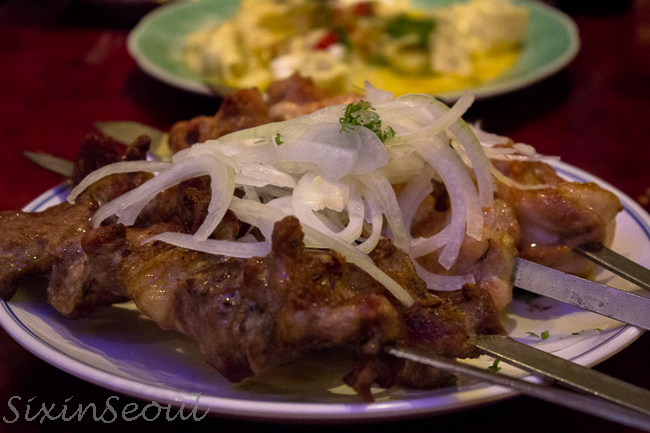 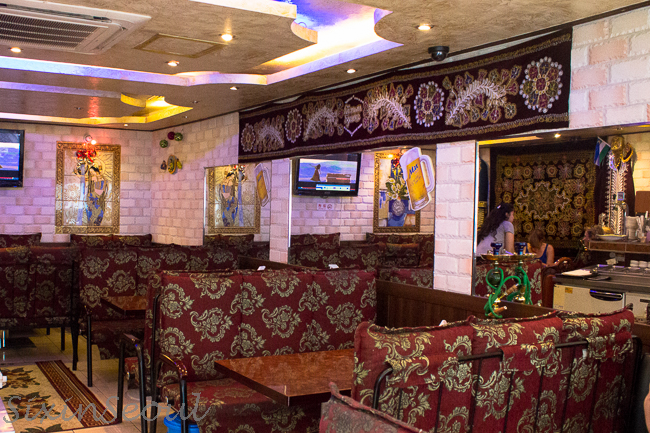 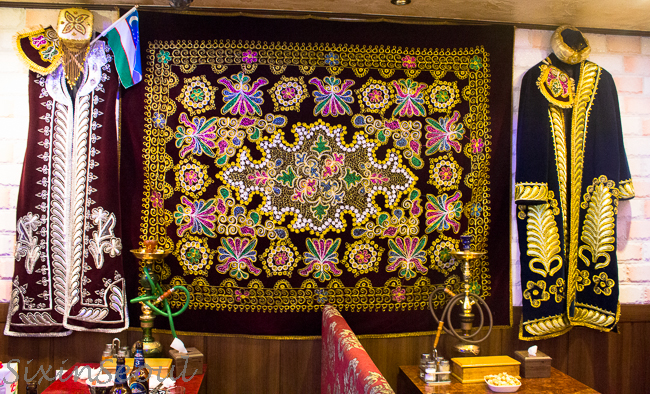 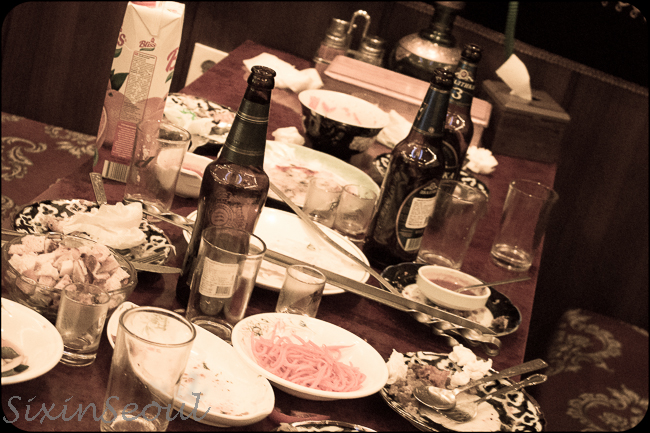 To get there:
Dongdaemun History and Culture Park Station (you can get there using subway lines 2, 4 or 5!)
Take Exit 5.
Go right and turn left at the intersection at Mareunnae-ro Street.
Go straight a few steps and you will see a very small alley - turn right down this alley!!
Do you see it???  There is a car in the alley....easy to miss right between megobuks and that orange sign. 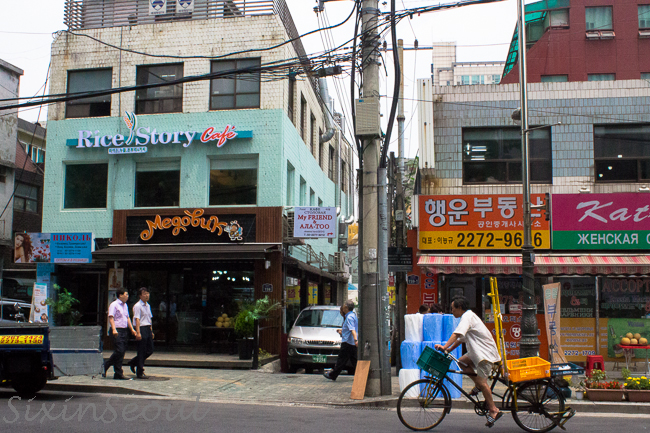 Go straight until you come upon the restaurant.
If they make you go into a different restaurant, don't worry, they own them all.

I can't believe I missed this one. Now I'm even more jealous.